Home » Blog » How Many Polish Live in Uk?

How Many Polish Live in Uk? 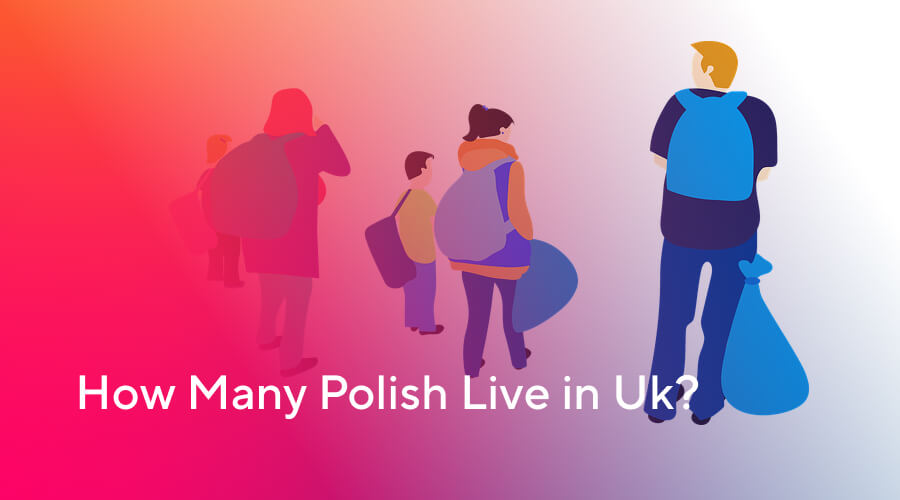 How Many Polish Live in Uk? The answer to this question is not as straightforward as one might think. According to the Office for National Statistics (ONS), there were an estimated 831,000 people of Polish nationality living in the UK in 2019. This number includes both those born in Poland and those born elsewhere who identify as Polish or are dual nationals of the UK and Poland. This figure marks a significant increase from the number of estimated Polish migrants living in the UK in 2013, which was 579,000.

Polish British people, otherwise known as British Poles, are citizens of the United Kingdom who have Polish heritage. The term encompasses those born in Britain whose bloodline originates from Poland and covers immigrants to the UK of Polish descent.

According to recent studies conducted by immigration authorities, there are roughly 900 000 individuals born in this Eastern European country currently living in England. This new demographic has become one of many largest minority ethnicities residing within its borders alongside Irish residents, Indians, Pakistanis, Bangladeshis’ Germans and Chinese since the late 20th century onwards.

Migrating since the Medieval Times

From the Middle Ages onward, diplomatic ties between England and Poland-Lithuania flourished through the exchange. A prominent Polish figure in 16th-century England was John Laski, a Protestant convert who had an immense part to play in helping formulate the Church of England amidst the English Reformation.

After the Commonwealth’s dismemberment in three partitions by Poland’s neighbors during the 18th century, a steady stream of Polish immigrants to Britain began due to two 19th-century uprisings (1831 and 1863) that drove out much of Poland’s ruling class.

As Poland sought international assistance for their impending revolution, London became a hub of burgeoning Polish socialist ideologies. Many exiles from the country fought alongside British forces in the Crimean War. In addition to this, during the late nineteenth century governments across Europe initiated pogroms against Jewish Poles in both Russian and Austrian sectors of partitioned Poland (Galicia).

Faced with the unfortunate circumstances in their homeland, a number of Polish Jews chose to leave and find new homes. The majority decided on the United States as their destination, while some elected to relocate to cities around Britain – most notably London, Manchester, Leeds and Kingston upon Hull.

On September 3rd, 1939, the United Kingdom and France declared war on Germany to stand in solidarity with their allied Poland. Consequently, Poland’s government was relocated abroad – first to France until its untimely fall in May of 1940 when they moved to London for refuge.

The Poles made a great impact on the Allied cause during WWII; their naval units were the first to unite with Britain’s Royal Navy through the “Peking Plan.” Polish pilots had a significant part in England’s defence against Germany during The Battle of Britain and later, they joined forces with other Allies for an invasion of Nazi-occupied France. Following the conclusion of World War II, Poland was subjected to Soviet rule and a large majority of Polish military veterans were left stranded in Britain.

Polish soldiers from the eastern areas of Poland, which were altered as a result of post-WWII Potsdam Agreement border changes, experienced an immense amount of concern. Though largely unrecognized after 1945, the Polish government-in-exile in London continued to exist until 1991 when a democratically elected president took power in Warsaw and ultimately dissolved it.

In 2004, the enlargement of the European Union and Britain’s invitation to immigrants from new accession states enticed a vast number of Poles to move to Britain instead of Germany. This amalgamated with almost 200,000 Polish people who had initially taken refuge in Great Britain after World War II. Roughly one-fifth relocated throughout other parts of the British Empire at this time.

The influence of Polish Culture

The Polish language is immensely popular in England, and it’s the second-most spoken language there as well as the third-most spoken in all of the UK. Around 1% of people residing in Britain speak Polish! Astoundingly, since 2001, this population has increased by a factor of more than tenfold bringing more of their polish culture to the UK.

However, as some may not have registered as Polish with the ONS, this number could be higher. It is thought that around one million British citizens have at least one parent who was born in Poland, and a further 500,000 may have Polish origin but not identify as Polish.

In terms of employment status within the UK population as a whole, the Polish community are disproportionately employed in low-skilled or unskilled jobs. However, many also occupy managerial positions or have higher education qualifications. The most popular industries amongst the Polish population in the UK are construction, hospitality and catering, manufacturing and agriculture. Many Polish citizens also work as freelancers or entrepreneurs.

How dispersed is the Polish diaspora?

In addition to the estimated 831,000 Polish nationals living in the UK, there are many more who come temporarily for short-term employment or study opportunities. According to a recent survey conducted by the Polish Press Agency, approximately 50,000 Poles travel to the UK every year for work and another 20,000 young people come to study reaching thus a total number of 900,000 Poles.

Overall, it is estimated that around one million people with Polish origin and heritage live in the UK, making them one of the largest ethnic groups in Britain. They have made a significant contribution to British society and culture, and continue to do so.

The Polish people living in the UK have made a great impact on British culture, especially the recent years. With an estimated one million individuals, many Polish people now living in the UK have overflowed many cities. This is due to both temporary and permanent Polish migration over recent years for work or study opportunities as well as those who were relocated during World War II. The labour market is one of the key reasons for their migration to British soil.

The Poles continue to make huge contributions to society through their employment in various industries such as construction, hospitality, manufacturing and agriculture. They also bring cultural diversity that enriches life in Britain today. As we look into the future, it will be interesting to see how this vibrant community continues to shape UK’s history as a nation!