Polish Migration to the UK facts 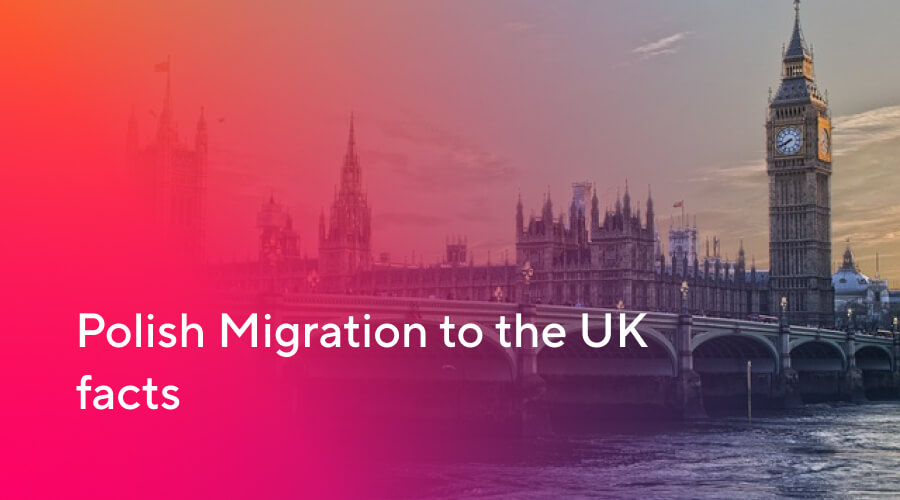 Polish Migration to the UK facts: After Poland joined the European Union in 2004, one of Britain’s most paramount migrations began. An astonishing 800,000 people have taken advantage of their legal right to come and work in the UK from Poland since then.

The United Kingdom was one of the only three countries to provide immediate access for new European Union citizens to come and seek employment, contrary to France and Germany’s regulations that necessitated a transitional period. This decision has been highly discussed in both British politics and media ever since its introduction.

Poles have been incredibly mobile in recent years, with significant populations settling across Europe from Scandinavia and Southern Europe to Germany, France and Ireland. Since the European Union was extended in 2004, no other ethnic group has exhibited as much mobility within the continent as Poles. Polish communities are an interesting phenomenon indeed!

The European Union was significantly expanded in 2004 when a number of former communist countries including Hungary, the Czech Republic, Slovakia, Latvia, Lithuania, Estonia and Slovenia joined. In the UK – as elsewhere – Poland led other European ‘accession’ migrants with over two-thirds of total numbers, followed by Lithuanians and Slovaks.

The primary reasons for Polish Migration

Although being part of the European Union and having legal permission to work in the UK (and further afield) are essential criteria, they do not explain this trend entirely – other contexts must be taken into account for a comprehensive understanding.

Poland has a long history of migration, evidenced by the hundreds of thousands who migrated to the United States in the nineteenth century and those Poles travelling to Germany for work. Migration as a means to seek out new opportunities is not an odd thing in Polish culture. Additionally, Poland’s communist past is integral in understanding current migration patterns today.

Leaving the nation was hard during the communist domination (people were not allowed to store their passports at home, for instance) but when communism crumbled in 1989 many viewed it as a fresh start and a chance to experience the freedom of movement.

Furthermore, in the aftermath of the Soviet Union’s dissolution during the 1990s, our nation encountered a trying period of transition as it changed from a centrally planned to a market economy. This spawned severe unemployment due to many enterprises shutting down and numerous individuals having no means of employment after decades without such an issue.

The transition from communism to capitalism was a slow-moving process, and with it came the loss of many of the protections that had been provided for workers. This caused much disappointment among citizens as the promise of a brighter future never materialized. The impact on young people was particularly great in 2004 when Poland became part of the European Union. Unemployment amongst this age group skyrocketed during this time period.

Lastly, numerous Poles experienced exasperation with the arduousness of life in general – it was notoriously difficult to find employment or make profitable connections. For a multitude, migration had become less about seeking job opportunities and more so concerning finding a better lifestyle overall.

Poles living in the UK facts

The current article addresses significant motifs regarding Polish migration to the United Kingdom since 2004. For most Poles, making a sufficient income in Poland seemed nearly impossible, despite them having specialized professions. As a result, it was difficult for many to envision a life or future in their homeland.

Moreover, Poles in Britain were unfortunately characterized as unskilled and jobless when they arrived in the UK. However, this assumption is not true of all migrant workers since some opted to leave Poland due to insufficient wages from labour.

After the 2004 Polish migration surge, diverse patterns of movement began to emerge. The traditional pattern of men migrating first and bringing their families along has been prominent; however, a considerable amount of women have also migrated independently. This shows that not every migratory pattern follows the same order or meets similar expectations.

Polish migrant workers are often clouded by gender stereotypes and myths. Contrary to what some media outlets suggest, not all Polish males are plumbers or handymen. Poles of either gender can hold jobs in a variety of sectors, including factory work, transport services, agriculture and even highly specialized roles.

Furthermore, there has been an exponential growth in the number of skilled professionals coming from Poland to the United Kingdom over recent years.

Polish migrants have immensely profited from the advances in technology and infrastructure, such as access to the Internet, Zoom, apps on smartphones, television broadcasts, and discounted coach and air travel services with no visa requirements for travelling to the UK. These incredible benefits make it far easier for Polish immigrants to stay connected with their families and other Polish people back home compared to earlier migrant populations who lacked these luxuries.

Though it is the 21st century and technological advances should make migration easier, this isn’t necessarily the case. There are always costs associated with migrating to a new place, not to mention that migrants feel disconnected from their old homes.

Being at the bottom of the ladder in Britain has its own set of expenses. Numerous Poles endured and still live in abysmal housing while being aware of a great deal of anti-Polish bias surrounding this issue.

Polish impact on the United Kingdom

The Home Office Accession Monitoring Report reveals that Polish people have resettled throughout the United Kingdom, from England to Wales and Scotland to Northern Ireland. Interestingly, East Anglia is one of the areas where an especially large number of them reside. Poles are undisputedly the most widespread ethnic minority population in this nation with a huge polish diaspora.

Due to the size and visibility of the Polish population, it is not uncommon to find a Polish shop in many towns across the country. Additionally, there are usually at least some students with a Polish background attending most schools as well. Despite the fact that Polish people are a white and mainly Christian demographic, they remain quite distinct in British society. Visibility has not been an issue for them.

We cannot predict yet what the lasting impacts of this visibility will be, particularly in regards to how much the children and grandchildren of these recent immigrants may ‘fade away’ as they blend into British culture through marriage and long-term residency. Their accents and the polish children ‘s names could potentially become more English over time—and only time can tell!

It is evident that most Polish immigrants have maintained strong links with Poland, and their progeny will thus be able to find a balance between their Polish and British identities – much like the children of previous migrations.

Despite the visible population gradually diminishing, it is highly improbable that Poland and its culture will never be completely absent from British life. Polish immigration to the UK since 2004 has had a remarkable effect on numerous facets of our lives.

Polish is now the second most widely spoken language in the country and most towns and cities have a Polish population. Polish migration has also been linked to discussions about the United Kingdom’s relationship with the European Union and its ethos of freedom of movement for people within the union.

Ever since the Brexit vote in June 2016, hostility towards Polish migrants living in the UK has been on an incline. This move caused a significant amount of consternation for many Poles who have resided here for ten years and beyond, leaving them uncertain about their future prospects concerning remaining in Britain.

Overall, the influx of Polish immigrants to the United Kingdom since 2004 has had a significant impact on British culture. Not only is it now one of the most widely spoken languages in Britain, but Poles have also contributed significantly to discussions about freedom of movement within Europe and Brexit. Despite increasing hostility towards them due to Brexit, many Poles continue to stay connected with their homeland while still making an impact in Britain.

As time goes on, we can expect that this connection between Poland and its diaspora will remain strong even as more generations are born into British society. It’s clear that no matter what happens in politics or economics over the coming years, Poland’s influence on the United Kingdom will persist for many years to come.