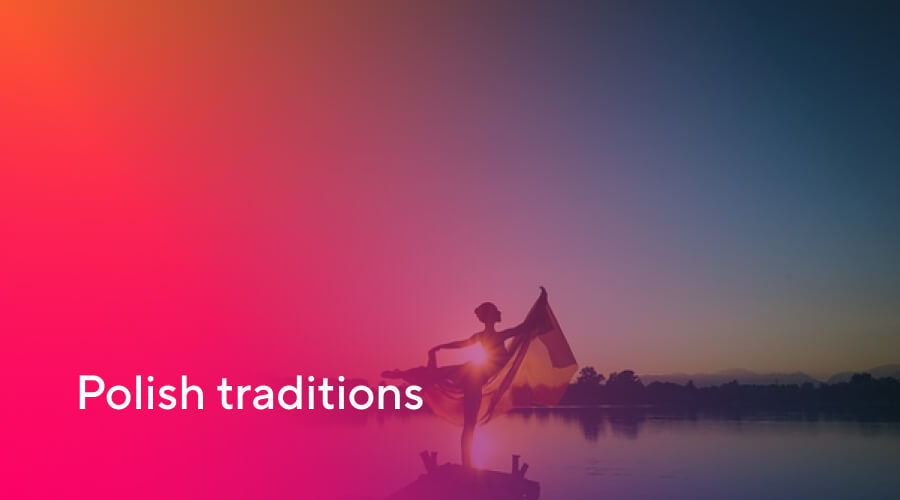 Polish traditions are rich and diverse, offering a unique insight into the culture and history of the Polish people. From food to music to religious customs, these traditions have been passed down from generation to generation for hundreds of years. Popular holidays such as Christmas and Easter take on special significance in Poland and feature a variety of traditional dishes and festive activities that are unique to the country. Let’s take them one by one.

One of the most popular Polish traditions is the sharing of opłatek, which is a thin wafer shared at Christmas and other religious occasions. Sharing this wafer symbolizes forgiveness for past wrongs and brings friends and family together in peace.

Another tradition involves the blessing of bread on Easter morning, known as Świeconka. This blessing of the bread typically involves family members sharing a piece of blessed bread and then eating it together in celebration.

Polish cuisine is a delectable feast for the senses, featuring an array of succulent meats such as pork, chicken, and game. It also includes an abundance of vegetables, spices, mushrooms, and herbs—not to mention all varieties of noodles, cereals, and grains! Polish dishes are known for being hearty, with plenty of buttery goodness and egg-based ingredients that add flavor. Plus, there’s lots of creaminess from the seasoning, generously used from start to finish.

Polish cuisine is renowned for its noteworthy dishes such as bigos, pierogi, kiełbasa, and kotlet schabowy (breaded pork loin cutlet). One of the main dishes like Gołąbki (cabbage roll), zrazy (roulade), and soups like ogórkowa (sour cucumber soup), grzybowa (mushroom soup), or pomidorowa (tomato soup) are staples of the country’s gastronomy. Hearty broths include rosół and żurek – a sour rye variety- while flaki tripe stews are also popular. Of course, one cannot forget the beetroot barszcz!

Polish culture also celebrates a variety of traditional festivals throughout the year, such as Wianki in the summertime and Dożynki at the end of the harvest season. These events involve local communities coming together for music, dancing, food, and drinks. In addition to these festivals, Poland is home to many traditional folk dances such as polka and mazurka that bring people from all over the country together in celebration.

These centuries-old Polish traditions are an important part of the culture and have been passed down through the generations. From food and music to religious customs, these traditions bring friends and family together in joy and celebration. They offer a peek into the history of Poland, allowing us to appreciate the country’s rich heritage. By embracing these customs, we can ensure that they are preserved for future generations to come!

Centuries before the 10th century, Polish folk music flourished as a beloved tradition. From then on, early signs of an artistic and unique style emerged in religious tunes that highlighted captivating melodies.

During the last one thousand years, Polish folk music has undergone a remarkable evolution. With dynamic influences from Catholics, Protestants, Muslims, and Jews that settled in Poland or passed through it over time, this genre of music became something unique to its land – featuring signature styles you shouldn’t miss!

The Krakowiak is a highly energetic, syncopated form of Polish folk music that has its origins in the city of Kraków. The exuberant melodies and toe-tapping beats draw you into an irresistible urge to move along with each beat! It’s no surprise that this unique style has become one of Poland’s most beloved forms of traditional music.

By contrast, the Kujawiak is an elegant, graceful dance that exudes calmness and serenity. Dancers of this type of music sway gracefully in circles to the beautiful melodies with a waltzing triple meter, as opposed to Krakowiak’s stomping and jumping movements.

Poland’s Oberek is the swiftest of classical dances and music, a bouncing polka-like style that propels along with each beat. It features fast steps and twirls as both partners spin, bound, hop, turn, and leap to the musical rhythm.

The Mazurka and the Polonaise

Drawing on Poland’s traditional folk melodies, Frederic Chopin composed two styles of music that have since become staples in both classical and popular culture: the Polonaise and its accompanying dance. The word “Polonaise” comes from the French term for “Poland,” reflecting its rapid-fire 16-note structure, which swept through Europe during the 1700s, becoming a favorite among those who moved within royal courts.

The Mazurka is a traditional form of Polish folk music that carries an unexpected beat, creating sudden accents on the second or third beats. Its captivating rhythms are expressed in 3/4 time and will leave you entranced by their energy.

While modern life moves at a rapid pace, leaving less time for classic socializing and family reunions, this reality can also be felt in Poland. Nonetheless, especially in rural areas where traditions are treasured and honored – such as birthdays, name days, anniversaries, or religious holidays – you can still enjoy the warm and heartfelt atmosphere of a traditional Polish dinner gathering.

When you receive an invitation to someone’s home, it is a gesture of trust and a vital part of forming relationships with new people, whether they are acquaintances or business partners. To make sure that your stay at their residence goes smoothly, here are some etiquette guidelines worth noting:

Being punctual is the highest form of politeness.

The Artistry and Creativity of Poland

Polish traditions are also deeply rooted in artistry and creativity. Iconic Polish painters like Jan Matejko, Stanisław Wyspiański, and Jacek Malczewski helped define the culture of the country through their works.

Traditional handicrafts such as wycinanki (paper cutting) and haft krzyżykowy (cross-stitch embroidery) are still popular among Polish crafters today. There is also a vibrant musical culture, with distinctive genres like polka, mazurka, and oberek being enjoyed by people across the world

The customs and traditions of Poland are truly unique and diverse, offering a glimpse into the culture of the country that is hard to find anywhere else in the world. By participating in these cultural events, we can help ensure that these traditions remain alive for generations to come. As long as people continue to embrace Polish customs and celebrate them in their own unique way, these timeless traditions will stay alive and strong.

The Poles adhere to similar dating customs as other Western European countries, yet remain moderately more conservative regarding relationships. Poles tend to marry at a much earlier age than the remainder of the nations in the EU, and living together before marriage is generally discouraged by the parents of couples. They often provide financial aid for newlyweds, allowing them to reside with their families until they can establish themselves independently.

In the 1990s, more than half of all married men were under 25. However, this has shifted dramatically in recent years, from a high of 73% of women marrying young in the 1990s to as little as 34% today. Currently, those between 25 and 29 are most likely to wed, which suggests Poles have an increased amount of education before entering matrimony. In 2013, for example, 47% had a higher level of qualification compared to 15% just 13 years prior! Furthermore, only 4% had attained such levels back in the ’90s!

A Polish wedding is typically a grandiose event, complete with games and conversations between courses. These nuptials demonstrate the Poles’ passion for celebrations; in fact, they even have a custom called “poprawiny,” which is essentially throwing another wedding party after the initial one!

Despite the changes in modern society, Polish traditions and customs remain an important part of life for many people living in Poland today. From festive holidays and traditional celebrations to iconic works of art and vibrant music as well as marriage traditions, these customs bring joy to countless generations and help keep the tradition alive for years to come.

By participating in these events, we can help ensure that these customs and traditions remain alive for future generations to enjoy. That’s why it’s important to celebrate Polish culture and embrace its values throughout the year. These centuries-old traditions offer a unique look into Poland’s rich history and will continue to be an integral part of the nation’s culture for many more years to come.