The Turkish community in Germany 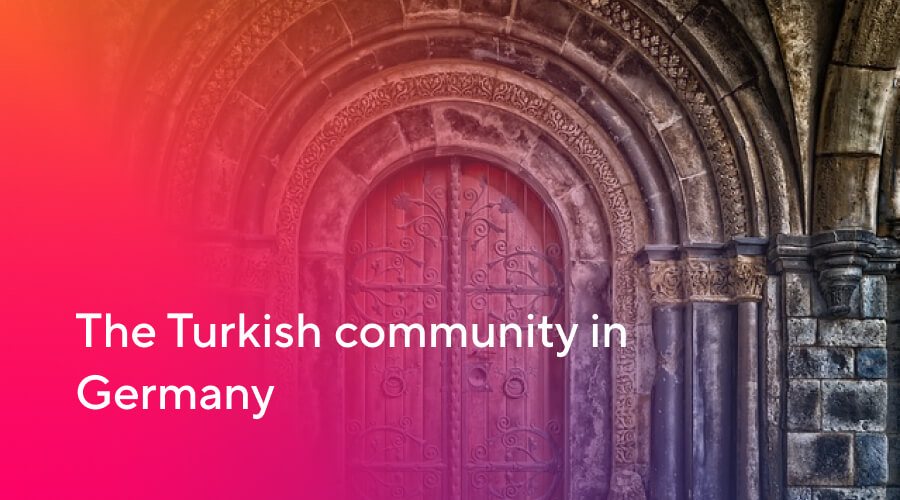 The Turkish community in Germany or Turkish people have played an integral role in German society for over five decades. Millions of Turks have immigrated to Germany.

It started in the 1960s and continues to do so today. The Turkish community in Germany are predominantly Muslim and form the largest ethnic group which practices Islam in Germany.

This makes them one of the largest ethnic minority populations in the country. Let’s explore how this vibrant community has shaped German culture and enriched it with its traditions.

The relationship between Germans and Turks has evolved dramatically since the first wave of migration in 1961. Initially, many Turks were seen as temporary “guest workers” or labour migrants who would eventually return home after they earn money.

However, as more generations were born and raised in Germany, they began to form a distinct cultural identity that blended both German and Turkish customs. This was a major milestone on the road to acceptance—Turks became seen as an integral part of German society instead of just guests passing through. Gradually, except for Turkish citizenship, Turkish people started getting German citizenship too!

When did the Turkish Diaspora start migrating to Germany?

The German-Turk Diaspora began in the early 1960s when Germany began recruiting foreign workers to fill labor shortages in the booming post-war era. As a result, thousands of Turkish people came to Germany, settling mainly in North Rhine-Westphalia and other parts of Western Germany. Over the years, a number of complexes, ethnic enclaves, and ghettos have been established by the now large community of Turks in Germany that exists today. It is estimated that over 2 million Turks now live in Germany, representing one of the largest international communities making up a significant part of German society.

Contribution To The Economy

The contributions made by the Turkish community to Germany’s economy are often overlooked. In fact, according to official statistics provided by Destatis (the Federal Statistical Office), Turkish-owned businesses have created over 200 thousand jobs in Germany alone! This is a testament to how hardworking and entrepreneurial Turks have been throughout their time here. Moreover, their presence has allowed them to start businesses that focus on serving other community members—such as halal supermarkets or kebab shops—allowing them to preserve their culture within a new country.

The role of Turkish workers in Germany

Turks are the largest ethnic minority group in Germany, with an estimated 3 million people of Turkish descent making up a large part of the German diaspora. The flow of Turkish people who came to work in Germany started in the 1960s to address booming industrial needs. Over the decades, it has evolved into a major source of cultural exchange between the two countries.

Despite some tensions between both groups, Turks have become an inseparable part of german society, supported by strong organizations that actively engage with german policies and issues related to Turkish immigrants. This brings a new perspective from an international background to a german culture that benefits both nations, creating mutual understanding and appreciation.

How many people in Germany speak Turkish?

German society is home to a large so-called Turkish community, often referred to as german Turks. In 2018, there were over 2.7 million german citizens with a migrant background from Turkey in German-speaking countries. Of those german citizens, an estimated 1.5 million spoke Turkish – making it the third most commonly spoken language after German and English.

Turkish is one of the official minority languages in Germany, which means that its speakers have the right to use it in dealings with administrative bodies and courts, among other things. Clearly, the german Turkish community has an important role in modern german society, contributing significantly both linguistically and culturally.

In addition to providing valuable support for small businesses, another great benefit provided by Turks living in Germany is language convenience.

Many speak both Turkish and German fluently, allowing them access not only to mainstream media but also international news sources from Turkey itself—which can be incredibly helpful for those looking for comprehensive coverage of current events back home or abroad.

This also makes it easier for people from different backgrounds to communicate with one another without having to rely on translation services or dictionaries, leading to improved understanding between cultures which can only benefit everyone involved!

The presence of the Turkish community in Germany has greatly enriched its culture over the past five decades. There is no denying that immigrants from Turkey have created countless jobs, provided convenient language services, and embraced both their native traditions while integrating into German society—allowing them access not only mainstream media but also international news sources from Turkey itself! All these contributions are worth celebrating; we should embrace our differences rather than fear them!