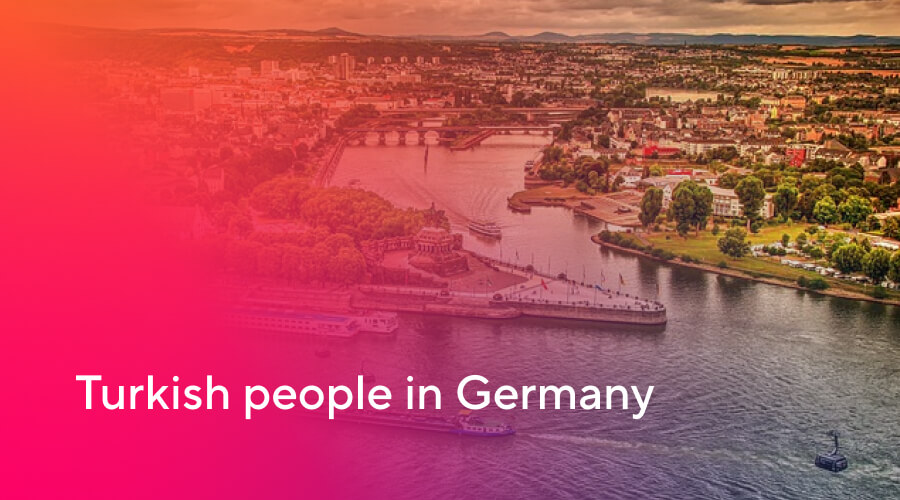 Turkish people in Germany- Growing up in Turkey and adapting to German culture can be one of the most rewarding experiences you’ll ever have.

Even though some may think that living and working in Germany as a Turkish person may seem intimidating.

What’s more, there are numerous benefits for employers and employees that come with having Turks work in Germany – from helping foster better language learning opportunities for Turkish generations born abroad to connecting local populations with the wider immigration debate.

This blog post is dedicated to illustrating how modern-day integration between Turkey and Germany is mutually beneficial, exploring the cultural landscape of Turkish workers living in Germany today without losing focus on acknowledging areas where improvement could still take place. We will also provide tips on what resources exist for those considering attempting a similar journey who want to make sure their experience proves successful at every stage.

West Germany witnessed an “economic miracle” in the middle of the 20th century, but the Berlin Wall’s erection in 1961 made the country’s labor shortage worse by limiting the influx of immigrants from East Germany. Because of this, on October 30, 1961, the West German government formally welcomed the Turkish people to immigrate to the nation by signing a labor recruitment agreement with the Republic of Turkey.

To extend the stay of Turkish workers in West Germany, German companies in 1961–1962 exerted significant pressure on the State to repeal the Gastarbeiter (or “guest worker”) agreement’s two-year limitation clause.

Most Turkish immigrants to West Germany intended to stay there just briefly before returning to Turkey to start a new life with the money they had made. Return migration indeed increased during the recession of 1966–1967, the 1973 oil crisis, and the early 1980s remigration bonus scheme.

The Turkish community in Germany

The Turkish diaspora in Germany is an ethnic minority population that has grown significantly over the last 70 years. With german society offering high standards of living and educational opportunities, Turkish people have continued to be attracted to Germany as an ideal place for immigration – rapidly forming strong German-Turk communities.

Whilst there are still major differences between german and Turkish cultures, german Turks have been actively contributing to german culture and way of life, enriching the wider german community and advancing the country’s global awareness. Embracing cultural dialogue, german Turks are making valuable contributions to Germany and their ancestral homeland in terms of different cultural insights and social understanding.

The German state does not allow citizens to self-declare their identity; consequently, the statistics published in the official German census do not show data on ethnicity. According to the 2011 census, 2.7 million German residents had a “migration background” from Turkey.[However, this excludes ethnic Turks with both parents born with German citizenship and the significant ethnic Turkish communities which have migrated to Germany from the Balkans and the Levant.

As early as 1997 (i.e. 14 years before the 2011 census), the Chancellor of Germany, Helmut Kohl, said that there were already 3 million Turks living in Germany. Moreover, at the time of the 2011 census, a report published by the Embassy of Germany, Washington, D.C. said that there were roughly 4 million Turks in Germany, of which 2 million had German citizenship. More recently, in 2013, the German chancellor, Angela Merkel, said, “Germany’s Leitkultur needs to be accepted by Germany’s seven million Turkish immigrants.”

The fallen of the Berlin Wall and migration

Intense public debate about the definitions of national identity and citizenship, especially the position of Germany’s Turkish minority in the future of a unified Germany, followed the collapse of the Berlin Wall in 1989 and the reunification of East and West Germany. These citizenship discussions were accompanied by acts of xenophobia and racial violence directed at the Turkish populace. The former eastern states of Germany, which underwent significant social and economic transformations during the reunification process, experienced particularly strong anti-immigrant sentiment. Turkish communities experienced considerable fear for their safety throughout Germany, with 1,500 reported cases of right-wing violence and 2,200 cases the year after.

In addition to raising awareness of integration concerns, the political rhetoric in favor of “foreigner-free zones” (Ausländer-Freie Zonen) and the growth of neo-Nazi organizations also increased support among liberal Germans for the opposing notion that Germany is a “multicultural” country. It took a long time for citizenship laws to establish eligibility based on place of birth rather than ancestry, and dual citizenship is still subject to onerous regulations. But more and more second-generation Turkish Germans have chosen to become German citizens and are getting increasingly involved in politics.

For decades Turkish citizens in Germany could not become German citizens because of the traditional German construct of “nationhood.” The legal notion of citizenship was based on a German parent’s “blood ties” as opposed to citizenship based on country of birth and residence. This adhered to the political notion that Germany was not a country of immigration. For this reason, only those of partial Turkish origin (with one parent who was ethnically German) could obtain German citizenship.

In 1990 Germany’s citizenship law was somewhat relaxed with the introduction of the Foreigner’s Law; this gave Turkish workers and Turks abroad in Germany, the right to apply for a permanent residency permit after eight years of living there. Regarding people of Turkish origin born in Germany, who were also legally “foreign”, they were given the right to acquire German citizenship at the age of eighteen, provided that they gave up their Turkish citizenship.

Dual citizenship for Turks in Germany

The Citizenship Law of 1999, which was officially taken into effect on 1 January 2000, has facilitated the acquisition of German citizenship for people born outside of Germany, making it available to Turkish immigrants after eight years of legal residence in the country. The law’s most innovative provision granted dual citizenship to Turkish-origin children born in Germany; however, this right to dual citizenship ends at age 23 and the bearers must decide whether to keep their German citizenship or the citizenship of their parent’s country of birth.

Former Turkish citizens who have given up their citizenship can apply for the ‘Blue Card’ (Mavi Kart), which gives them some rights in Turkey, such as the right to live and work in Turkey, the right to possess and inherit land or the right to inherit; however, they do not have the right to vote.

In 2011 the Embassy of Germany, Washington, D.C. reported that as of 2005, there were 2 million Turks who already had German citizenship.

Turkish migration from the modern diaspora

In addition to ethnic Turkish people that have migrated to Germany from post-Ottoman modern nation-states, there has also been an increasing migration wave from the modern Turkish diaspora. For example, members of the Turkish Dutch community have also arrived in Germany as Dutch citizens.

According to a study by Petra Wieke de Jong, focusing on second-generation Turkish-Dutch people specifically born between 1983 and 1992, only 805 people from this age group and generation reported Germany as their country of emigration from 2001 to 2017. A further 1,761 people in this group did not report their emigration destination.

Turkish is the second most spoken language in Germany, after German. It was brought to the country by Turkish immigrants who spoke it as their first language. These immigrants mainly learned German through employment, mass media, and social settings, and it has now become a second language for many of them. Nonetheless, most Turkish immigrants have passed their mother tongue to their children and descendants. Turkish Germans become bilingual at an early age, learning Turkish at home and German in state schools; thereafter, a dialectal variety often remains in their repertoire of both languages.

Turkish Germans mainly speak German more fluently than their “domestic”-Turkish style language. Consequently, they often speak Turkish with a German accent or modeled German dialect. It is also common within the community to modify the Turkish language by adding German grammatical and syntactical structures. Parents generally encourage their children to improve their Turkish language skills further by attending private Turkish classes or choosing Turkish as a subject at school. In some states of Germany, the Turkish language has even been approved as a subject to be studied for the Abitur.

Turkish has also been influential in greater German society. For example, advertisements and banners in public spaces can be found written in Turkish. Hence, it is also familiar to other ethnic groups – it can even serve as a vernacular for some non-Turkish children and adolescents in urban neighborhoods with dominant Turkish communities.

Diaspora Turks are predominantly Muslim and form the largest ethnic group which practices Islam in Germany. Since the 1960s, “Turkish” has been seen as synonymous with “Muslim”; this is because Islam is considered to have a “Turkish character” in Germany.[This Turkish character is particularly evident in the Ottoman/Turkish-style architecture of many mosques scattered across Germany. In 2016, approximately 2,000 of Germany’s 3,000 mosques were Turkish, of which 900 were financed by the Diyanet İşleri Türk-İslam Birliği, an arm of the Turkish government and the remainder by other political Turkish groups. There is an ethnic Turkish Christian community in Germany; most of them came from recent Muslim Turkish backgrounds

If you’re a fan of delicious Turkish cuisine, look no further than Germany. The country is home to some of the best Turkish restaurants in Europe, serving every kind of dish from köfte to kebabs. To do your search for the perfect Turkish restaurant a little easier, we’ve rounded up ten of the most famous and delicious spots throughout Germany. Read on to discover the best places to get your fix of Turkish food!

This family-run restaurant has been serving delicious traditional dishes for over two decades. Located in Berlin’s Mitte district, Anatolia Istanbul specializes in mezes (appetizers) like hummus and baba ghanoush and freshly cooked fish dishes—all served with a side of delicious bread. Try their signature pide (Turkish pizza), made with minced meat or cheese.

Located in Hamburg’s St. Pauli district, Akar Restaurant is known for its cozy atmosphere and delicious traditional dishes prepared with fresh ingredients sourced locally. The menu includes all kinds of mezes and kebabs, grilled meats, and vegetarian options like falafel and borek (pastry filled with feta or spinach). They also have an extensive wine list featuring wines from Turkey and around the world.

Head over to Kebab Factory in Munich for an authentic experience without breaking the bank. This unassuming spot serves some of the tastiest kebabs in town at very reasonable prices—the perfect option for a quick bite on the go or an affordable dinner out on the town. You can choose between beef, chicken, or vegetarian options—all served with freshly made bread and topped off with their signature sauces.

No matter where you are in Germany, there’s sure to be a fantastic Turkish restaurant nearby! From Berlin to Munich and everywhere in between, you can find all kinds of mouth-watering dishes that will make your taste buds sing! Whether you’re looking for something quick or want to sit down for a cozy dinner out on the town—you’ll find it at one of these famous German eateries specializing in Turkish cuisine! Bon appetit!