Home » Blog » The Turkish population in Germany by city

The Turkish population in Germany by city 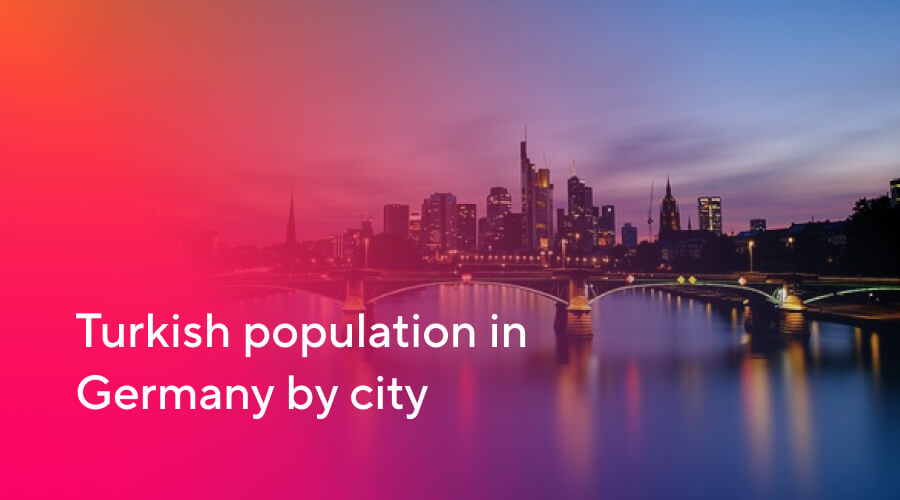 The Turkish population in Germany by city – Migration, and globalization have reshaped the landscape of countries around the world, and Germany is a prime example. This cosmopolitan nation has welcomed millions of immigrants over the years, bringing with them different cultures, languages, and religions.

One important immigrant community is Turks in Germany – their population has increased significantly since the 1960s, and they now form an integral part of German society.

In this blog post, we’ll explore Turkey’s changing presence in Germany by examining its population figures in various cities across the country.

1. Berlin has the largest Turkish population in the Country

Berlin has seen a development in its Turkish population in recent years, with an estimated 150,000 living there as of December 2019. This sizeable community has created distinct pockets of culture and commerce throughout the city, creating unique and diverse experiences for locals and visitors.

While many Turks are well-integrated into German society in Berlin, they still form their own communities where they can interact closely without having to worry about language barriers, thus fostering strong ties between the different generations within this population.

Fortunately, both Germans and Turks have formed an effective partnership to ensure that development within these communities takes place in a manner that is mutually beneficial for everyone involved.

2. Cologne has the second-largest Turkish population in Germany

Cologne is a city with a long and colorful history, and its development further accelerated during the past few decades. In particular, December of 2017 marked the official partnership between the city of Cologne and the Turkish people. This development has led to a vibrant Turkish community in the city – estimates suggest that as many as 50,000 people have found their home in Cologne who identify with Turkey either on ethnic or cultural grounds. That number grows by the day as more and more people move to the town in search of better job opportunities or simply for a different experience in life. Fortunately, German locals warmly welcome Turkish newcomers, which certainly helps them settle in peacefully and quickly adjust to their new surroundings.

3. Frankfurt has the third-largest Turkish population in the country

Frankfurt is home to an estimated 10,000 Turkish people, many of whom have established roots in the city and are part of the vibrant Turkish diaspora. This community is largely made up of Turkish foreigners who have come to Frankfurt seeking a better life for themselves and their families.

Despite being far from their Turkish homeland, many Turks in Frankfurt are still very much connected to their Turkish culture, proudly celebrating their Turkish heritage through family gatherings and festivals. Frankfurt is one of the most important cities for Turks living abroad and a testament to Germany’s commitment to multiculturalism and the ongoing strength of the Turkish people.

4. Hamburg has the fourth-largest Turkish population in Germany

Hamburg is home to many Turks, both citizens and immigrants alike. It’s a melting pot of cultures, boasting Turkish restaurants, stores, and markets.

While it’s hard to estimate exactly how many Turks live in Hamburg, it would be safe to say that there are thousands of Turks living in the city, with many making their homes here for business and leisure purposes. This community adds richly to the vibrant atmosphere of Hamburg with its distinct culture, adding even more flavor to the culturally diverse atmosphere of Germany.

5. Essen has the fifth-largest Turkish population in Germany

The Turkish population of Essen, Germany, is significant. Although it is difficult to pinpoint the exact amount of Turks living in this European city, estimates suggest that it may be up to 25% of the entire city’s population.

This presence is an important part of the city’s cultural makeup, as Turkish culture can be seen and experienced in various locations throughout Essen. From Turkish-owned stores, restaurants, and small businesses to established cultural centers, not everyone will have to look far to understand what it means to live like a Turk in Europe.

6. Bremen has the sixth-largest Turkish population in Germany

According to recent surveys, the number of Turkish people living in Bremen is rapidly increasing. Many immigrants have left their home country to start a new life, while others are descendants of earlier Turkish settlers.

With this change, Turkish culture is becoming more visible in the city – making its mark in cuisine and entertainment options, as well as through Turkish friends that are forming strong ties.

Although it can often be difficult for new arrivals to adjust initially, many Turkish families say they feel welcome here after just a few months. It’s clear then that Turkish people have found a happy place to call home in Bremen.