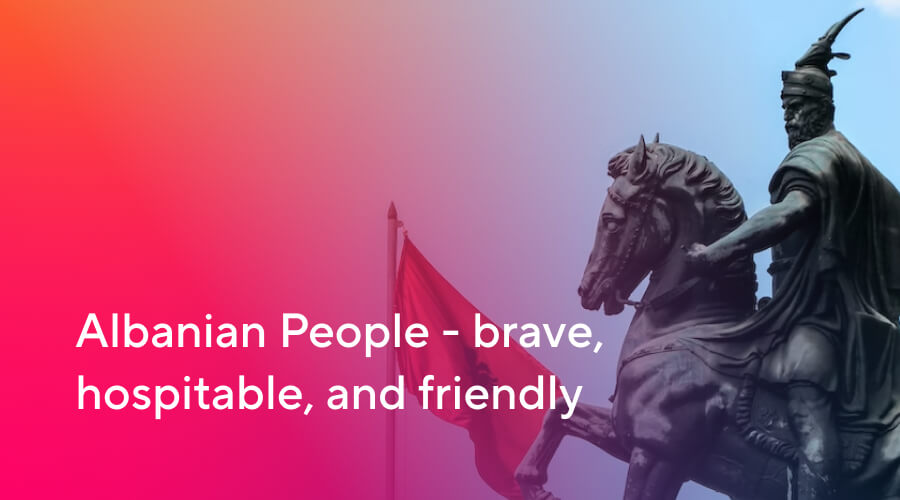 Albanian people live in a nation mainly located in the Balkan Peninsula. In Kosovo, about 93% of people are of Albanian heritage.

Exactly, in Albania, where it constitutes about 83% of the population, in Kosovo, about 93%, and in Northern Macedonia, about 25%.

There are about 13 million Albanians. Although today, more than half of Albanians live outside Albania and Kosovo, while the vast majority live in the Balkans! The Albanian People are generally friendly, hospitable, and brave! You’d be lucky to have them in your life!

In smaller numbers, there are historical Albanian communities in Turkey, Italy (Arbëreshes), Greece (Arvanites), and Montenegro. Also, in Ukraine, Serbia, Egypt, Bulgaria, Bosnia, Croatia, Romania, Slovenia, and more recently in Europe in Austria, Great Britain, France, Germany, Sweden, Switzerland, and in America in Argentina, Brazil, Canada, and the United States, as well as in various countries of exile.

They speak the Albanian language, which belongs to the Indo-European language family. According to religion, they are mainly Muslim or Christian (Orthodox or Catholic). Also, along with the Serbian language, Albanian it is one of the two official languages ​​of Kosovo. In the Republic of Macedonia, Albanian is the official language in municipalities where Albanians make up more than 20% of the population. The Albanian language is in official use in three municipalities in Montenegro (Ulqin, Plavë, and Tuz) and three in Serbia (Preševo, Bujanoc, and Medvegja).

Most Famous Albanian People in the world

The most famous Albanian in the world is Mother Teresa. Anjezë Gonxhe Bojaxhiu (Mother Teresa’s real name) was born in Skopje, the capital city of Macedonia, to an Albanian family from Kosovo. Also, she founded the Missionaries of Charity, a Roman Catholic religious congregation. Therefore, she spent most of her life in the Indian town of Calcutta. Where she helped people with aids and children. Also is important to mention that in 2016 in Saint Peter’s Square, Vatican City, Pope Francis canonized Mother Teresa on September 4.

Ismail Kadare is the most famous writer, novelist, and poet of contemporary Albania. He wrote several masterpieces. Including Chronicles in Stone, a novel set in his birthplace of Gijrokastër, one of the most beautiful towns in Albania and the Balkans.

Therefore, Kadare won many prizes for his works, including the Prince of Asturias Award (2009) and the Jerusalem Prize (2015).

The themes of Kadare’s works, which often draw heavily on his own life, include Albanian history, politics, folklore, blood-feud tradition, and ethnicity. His fiction has elements of romanticism, realism, and surrealism.

Dua Lipa was born in London, the eldest child of Kosovo Albanian parents Anesa (née Rexha) and Dukagjin Lipa from Prishtina, Kosovo. Her family is of Muslim heritage. Through her maternal grandmother, she is of Bosnian descent. Her ancestry can also be traced back to Peja, Kosovo.

After working as a model, she signed with Warner Bros Records in 2014. She released her eponymous debut album in 2017.

The album peaked at number three on the UK Albums Chart and yielded eight singles. The album has been certified platinum worldwide and won Lipa the Brit Awards for British Female Solo Artist.