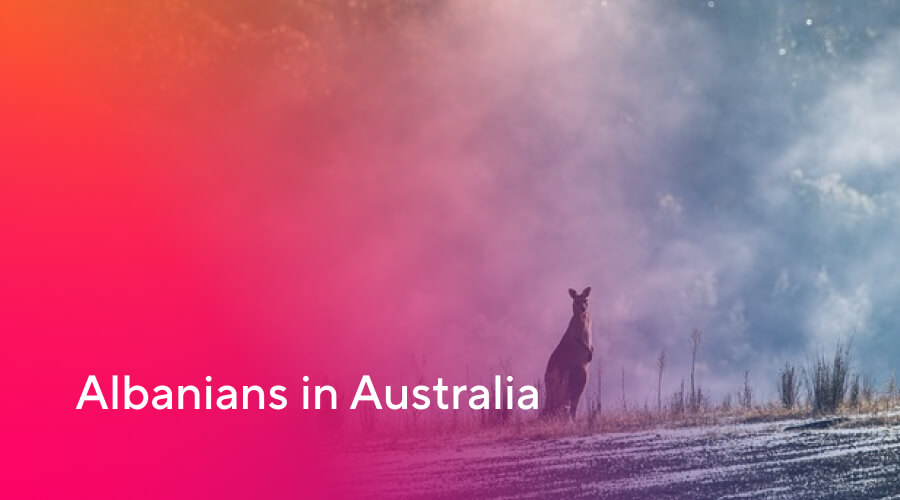 Albanians in Australia – Albania has a long and rich history that stretches back centuries. Over the years, many Albanians have left their homeland.

They did it to pursue new opportunities in far-off lands, including Australia. Today, an estimated 20,000-25,000 people of Albanian descent live in the Land Down Under. Let’s examine why so many Albanians have chosen to call Australia home.

The History of Albanian people in Australia

The earliest records of Albanians living in Australia date back to the early 20th century when immigrants from Albania began arriving on the continent’s shores. These migrants were largely economic migrants who had come to seek better job prospects and higher wages than what was available in their home country. At first, most of these immigrants worked as laborers or factory workers; however, over time, they began establishing businesses and contributing to the local economy in other ways.

Today, an estimated 20,000-25,000 people of Albanian descent live in Australia. The largest concentrations are found in Melbourne and Sydney, but there are also smaller pockets of Albanian communities throughout other parts of the country. This population includes first-generation immigrants and second-generation descendants who have been born and raised in Australia but still identify strongly with their heritage and culture.

Today, Albanians living in Australia are generally well-integrated into society and enjoy a high quality of life. Many have succeeded in fields such as business or entertainment – indeed, some have even become famous throughout the country! Moreover, unlike many other immigrant groups who tend to cluster together geographically, Albanians have spread out across all states and territories within Australia – a testament to their willingness to embrace life Down Under.

Of course, there are still challenges facing many community members today – particularly those who arrived more recently or live outside major cities – but these are slowly being addressed through initiatives such as language classes and cultural awareness campaigns. It also helps that Albania’s population has grown steadily over recent years due to increasing economic stability back home; this means that more people than ever before can now make the journey Down Under if they wish!

Kosovo Albanian refugees in Australia from 1999

Since the late 1990s, Kosovo Albanians have sought asylum from the war that Serbia conducted in Kosovo. As a result, thousands of people fleeing from Kosovo were accepted into Australia after being given asylum by the Australian government. They arrived with little to no possessions and began settling in many rural towns across the country due to their low language proficiency and limited access to public transportation.

Despite their many challenges, these refugees have persevered and worked hard to build a better life in Australia. Many are now proud citizens of Australia and have built successful businesses, although they still maintain their Albanian origin through their culture, traditions, and language.

This influx of Kosovo Albanian refugee has left a lasting impression on Australian society and continues to impact even today; this migration is a shining example of how different cultures can come together to form a unique national identity.

The Impact on Australian Society

Such a large number of Albanians has had a significant impact on Australian society – particularly among younger generations. The influence is felt through music and cuisine as well as more subtle cultural contributions such as language and hospitality traditions that have been passed down through generations. In addition, many young Australians now have friends or family members with an Albanian background which has helped them gain insights into different cultures and lifestyles that may not have been possible before.

The Impact on the Economy

Albanian-owned businesses contribute significantly to the Australian economy yearly through taxes paid and jobs created. These businesses range from small family-run operations to larger corporations that employ hundreds of people across multiple locations in Australia. By providing employment opportunities for both locals and immigrants alike, Albanian businesses help drive economic growth throughout the country while also giving back to their adopted homeland through charitable donations and the support of various causes.

Here’s what you need to know about Albanian culture

Albania is a country with a unique and vibrant culture. This is apparent in local Albanian communities where tradition is highly respected, and family ties are enjoyed by all. Albanian immigrants have continued to celebrate local customs, such as frequent local celebrations held throughout the year and traditional dances, food and music shared amongst friends and family. There is also a great sense of pride in embracing local customs, with many immigrants celebrating their local traditions to share with their newfound community members. This commitment to maintaining tradition has been embraced by local communities, which are now brimming with a culture like never before.

Overall, it’s clear that the presence of Albania’s diaspora has made a big impact on Australian society over the years. From economic contribution to cultural enrichment – there is no denying that this population has left its mark on the Land Down Under for future generations to enjoy!

Whether you’re looking for delicious traditional foods or want to explore some unique music styles – chances are you won’t be disappointed if you take some time out to discover all that the Australian Albanian community has to offer!

Albanians have greatly impacted Australia since first arriving in the 1990s. Their hard work has enabled them to become successful business owners or professionals within their fields—or both! Through this success, they are helping drive economic growth while also giving back through charities and other community initiatives. Whether you’re an immigrant or not, we can all learn something from their example: it is possible to transition from one culture to another while still retaining your identity–and making a positive contribution along the way! So let us all take a moment today to recognize these inspiring individuals for everything they bring to our society!