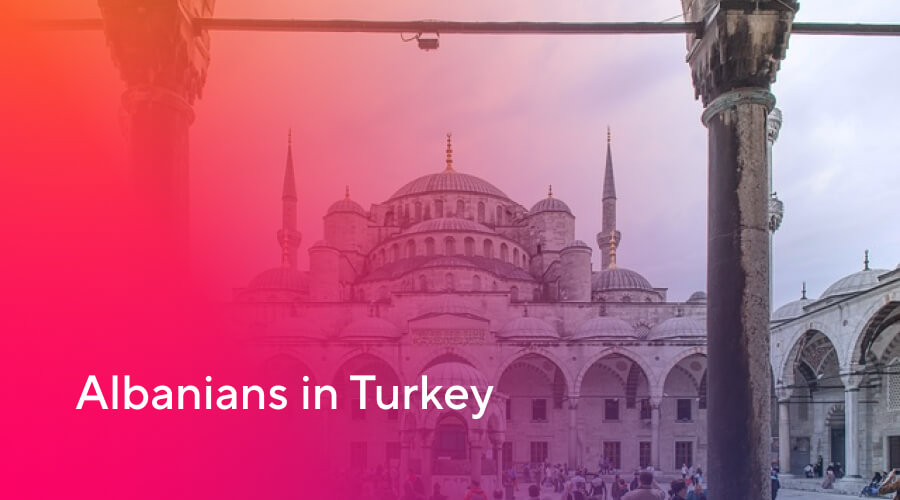 Albanians in Turkey: Situated as a vital place between Europe and the Middle East, Turkey has long welcomed migrants from both surrounding areas and beyond. Throughout history, its population has been comprised of migrants like Jews, Arabs, Greeks, Slavs and Turks – with Albanians more recently joining. Anatolia is thus an oft-cited example of how migration can create a diverse culture in one place. Making it undoubtedly one of the most important destinations for migratory flow globally.

The greatest concentration of the Albanian diaspora can be found in Europe, the US and Turkey. In fact, there are more people with Albanian backgrounds living overseas than within Albania and Kosovo’s borders. Though an exact figure is unknown, estimates suggest that around one million Turkish citizens have roots tracing back to Albania.

Migration and why did Albanians migrate to Turkey?

During the twentieth century, people fled Yugoslavia’s oppressive regime. In the past agreement between the former Yugoslav Republic and Turkey, many Albanians are now living in there. Albanians simply came to Turkey in search of better opportunities or because their family was already residing there.

Albanians in Turkey are largely concentrated in Istanbul, and a small number live in other large cities such as Ankara, İzmir, Bursa and Adana. More than half of the Albanians in Turkey are under the age of 30. This has largely been attributed to the fact that many young people from Albania have come to Turkey in search of better educational and employment opportunities. The majority of migrants with Albanian origin in Turkey are motivated by economic reasons, but some also come for family or cultural reasons.

Albanians have made a significant contribution to the Turkish economy, particularly in areas such as construction and hospitality. They often take on jobs that other locals do not want to do, such as manual labor or working in factories. Migrants with albanian origin also play an important role in Turkish culture by bringing their own unique customs and traditions, which can be seen in the architecture, music and cuisine of the country.

The Albanian community in Turkey is closely linked to the Muslim population of Albania, as well as to other Balkan communities living in Turkey such as Bosnians, Macedonians and Greeks. This close connection is reflected in the numerous social, cultural and religious events that take place in both countries. As a result of this strong connection, there are many Albanian restaurants and businesses in Istanbul which serve traditional food from Albania.

Despite their contribution to the Turkish economy and culture, Albanians face challenges in terms of accessing social services and employment opportunities. This is due to the large number of undocumented migrants of Albanian origin, as well as language barriers which can prevent them from finding work or interacting within Turkish society. In addition, Albanians often face discrimination in Turkey due to their ethnicity and religion. That’s why some of them prefer to say they speak Turkish and not Albanian even though that is their native language.

Since the 16th Century, a vast amount of Albanian immigrants have journeyed to Turkey, with an influx occurring during the Ottoman period. Such migrations persisted throughout the 1920s as refugees sought refuge from the oppressive Yugoslavian rule. As such, you can find evidence of this diaspora in all corners of Turkey – it’s almost certain that no matter where you go, there will be some trace left by migrants of Albanian origin!

The Albanians primarily settled in western Turkey but for centuries, families of Albanian descent and heritage have been found all around eastern Turkey. In particular, Diyarbakır, Doğubayazıt and Hakkari regions are home to a significant number of them – an area largely populated by Kurds. They don’t really speak the Albanian language being almost assimilated with the culture of their residing homes.

Turkey’s border countries in the Middle East, such as Syria, Iran and Iraq have close cultural and traditional ties to this part of Turkey. When Albanians arrived here centuries ago, they experienced varied economic and sociological settings compared to other parts of the country.

Assessing the impact of immigration on Turkey is difficult due to a lack of detailed analyses and records from both Ottoman times and the modern day. City-level data and province information are incredibly sparse, becoming increasingly rare with time. Despite this, researchers have gathered insights through word-of-mouth reports from locals who can provide invaluable knowledge about the issue in question.

For years, Kamil Bitis, General Coordinator of the Kosovo Cultural Center in Turkey has traveled through Eastern Turkey to find and document the stories of remaining Albanian families. He compiled these accounts into a book entitled “Türkiye’de Unutulmuş Arnavutlar” (“Forgotten Albanians of Turkey”), providing an invaluable source for anyone curious to learn more about this culture and the Albanian language.

Sadly, Bitis reports that currently, very few Albanian families can communicate in the language of their ancestors. Instead, they are conversant in Turkish and Kurdish. Worse yet, many of them have little awareness of their native culture or history or even negate their Albanian origins.

For centuries, the ancestors of these cities have married local women, establishing roots in their new homes and considering themselves Albanian throughout this transition. Recently, with Turkey’s launch of an online genealogy service, social media platforms and e-government portals have become important resources for discovering their own ancestral heritage.

Do they still speak Albanian?

Although the vast majority of Albanian families have been compelled to migrate from Dogubayazit to booming cities like Istanbul due to their impoverished socio-economic standing, approximately 10-15 households still cling on in this small town. They speak little to no Albanian and have no Albanian language skills for which to display if asked.

A vast Albanian population dwells in Bingol, though they have since been identified as the largest Kurdish group. This is due to their persistent effort of adapting culturally and sociologically over centuries, speaking both Turkish and Kurdish languages in order to better integrate into their local community. These families initially journeyed from Peja, Kosovo during the Ottoman period before eventually settling down in Bingöl.

While there is an intense emotional bond to their nation among Turkey’s Albanians, they are relatively unaware of the details regarding their own Albanian heritage and language. Contrary to expectation, they have no conflicts with the Turkish state or living in Turkey – instead, these individuals maintain a powerful mental and technical attachment to the Republic of Turkey itself.

But when queried about their heritage, they will still answer ‘Albanian’ despite lacking knowledge of the language or recent political occurrences. Some historians attribute this to a resettlement policy that has been in place for centuries.

One of Turkey’s renowned historians, Kemal. H. Karpat, explores in a study the notion that those who conformed to the Ottoman establishment were relocated to territories with an ethnically diverse population. For example, Mehmet Sadık Yigitbas has written a book entitled “Kigi” which examines precisely this phenomenon by focusing on one district of Bingol; further emphasizing Karpat’s argument and providing evidence for his theories.

Bingol is mainly inhabited by Kurds, but during the Ottoman Empire, numerous Albanian clans migrated to this city and others such as Diyarbakır, Tunceli, and Dogubayazit in order to fight against outlaws who intended to cause disruption for the ruling Ottoman government. These Albanian families had a strong association with Turks and Muslims which caused them to hold high positions within the Ottoman military.

The esteemed Turkish academic, Baskin Oran, believes that Albanians possess a special affinity with their Turkic heritage; Maria Todorova, the renowned Bulgarian historian and author of “Imagining the Balkans”, echoes this sentiment. She proclaimed, “This idea of ‘Turkishness’ was embraced by Balkan Muslims as a means to differentiate themselves from Christianity. As such, they often used the word Turk to identify themselves. During the Ottoman Empire era, Turkish identity and Islamic faith eventually united on a common ground.”

Apart from controlling riots, there are other explanations for why these two countries have grown so close. According to Bitis, the Ottoman Empire appointed Albanians as government officials in Eastern Turkey and those who had rebelled were sent away for punishment. Furthermore, during the 1900s many Serbs leaving their homeland due to persecution migrated here looking for refuge.

Albanian diaspora has undoubtedly changed the course of history and impacted modern-day Bingöl. Traditional Albanian culture is found in the region’s food, music and customs, which reflect an amalgamation of multicultural influences from Turkey, Europe and the Middle East. This variety of cultural artefacts unites all inhabitants despite differences in religion or ethnicity due to a shared reverence for Bingöl’s unique history.

The Albanian community has had a significant impact on the region of Bingöl, both in the past and present day. The Ottoman Empire recruited Albanians to serve as government officials in Eastern Turkey, and many families migrated here during that time.

Traditional Albanian culture is reflected in the region’s food, music, and customs. This shared reverence for the unique history of Bingöl has united its inhabitants despite differences in religion or ethnicity. Albanians have had a lasting impact on the region, both through its physical presence and cultural influences.