Home » Blog » Skënderbeu – Why should you visit Lezha and the hero’s tomb?

Skënderbeu – Why should you visit Lezha and the hero’s tomb? 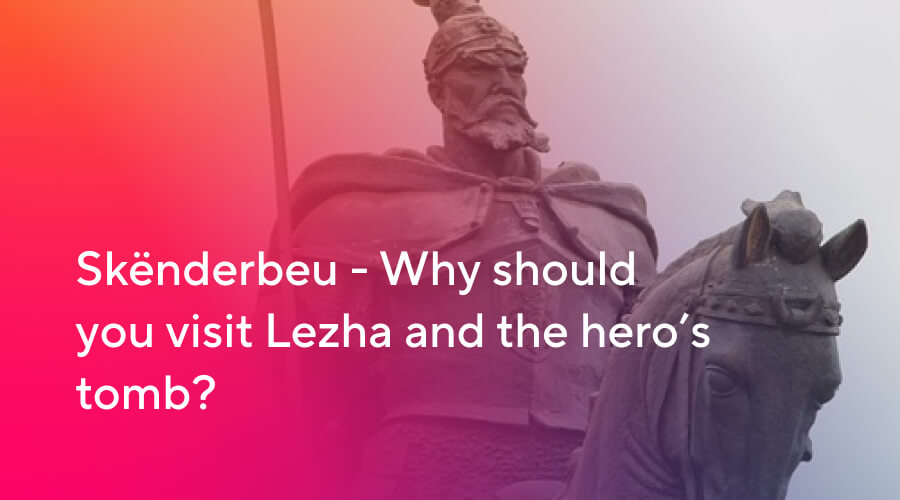 Skënderbeu, our National Hero, is not only that of the main protagonist of Albania’s history, but also of the main symbol of our national consciousness. This it’s why at least once you should come and visit Lezha.

Maybe Lezha it’s not the first city you think of when you say Albania. However, the city it’s a delightful with it’s breathtaking beaches of the southern coast. Yet, Lezha (Alessio, in Italian) if discovered calmly, is able to offer numerous pleasant cultural and gastronomic delights. And it’s only an hour away from Tirana. Oh and did I mention that you can also visit Gjergj Kastriot Skënderbeu’s tomb, or at least what has remained of it.

Skënderbeu and Lezha city as a tourist attraction

Despite being an important historical city of Albania, still it’s not a popular tourist destination. In 1444 the Albanian leader, Skënderbeu, gathered here the Albanian princes in the so-called ‘Lidhja e Lezhës’ to counter the Turkish advance.

The journey to discover Lezha begins right at ‘Mausoleumi i Skëndërbeut’. It’s located in the center of the remains at the former cathedral of San Nicola. This is an important area from an archaeological point of view. Unfortunately, Skënderbeu ‘s tomb, before the building of the memorial, suffered over the centuries, especially looting and vandalism.

The mausoleum was inaugurated on November 23, 1981. Designed specifically by the sculptor Odhise Paskali and the architect Latif Lazimi. If you plan a visit here, be careful because the memorial is not always open to the public.

What to see in Lezha?

A walk in the city leads to the Artistike Zadrima workshop, one of the most renowned craft realities in Albania. There you will find splendid textiles for homes and restaurants, items for celebrating sacred rites, and personal accessories, produced on the loom. The center was inaugurated in 2006, but since 1993 has been operating in the village of Blinisht.

Among the first to believe in the skills of the seamstress was the Italian missionary Don Antonio Sciarra. He together with the Catholic Mission in Albania, supported the center. They also invited other women from neighboring villages to join the cause. After a short time, the workshop became completely self-sufficient. Due to the increase of the clientele, in 2006 the workshop was moved to Lezha city. Today it’s the ideal place, not only to buy and take home typical and original Albanian products, but also to admire and live a precious tradition.

Lezha it’s the guardian of a wonderful manor, the Castle of Lezha, located on top of the city, in a strategic position, from which you can admire incomparable views of the Adriatic Sea. The area of ​​the castle has been developed since the fifth century BC., it’s ancient name is Lissus.

The period of greatest splendor came shortly before the Byzantine Empire, when the castle was ruled by the Progon and Tanush families, part of the Dukagjini clan. In 1393 the Venetians occupied the fortress and, subsequently, in 1478 the castle was conquered by the Ottomans. In 1729 a strong earthquake led its inhabitants to abandon the castle. Today the archaeological area still has remains of walls, defensive towers and the acropolis. You will also find an old church, which during the Ottoman occupation, was converted into a mosque. The cost of entry is 100 lekë and, just before the entrance, you will find a free parking lot where you can leave your car.

We can’t say that we went to Lezha without having made a stop in Fishtë. In this village you’ll find the restaurant Mrizi i Zanave. The farmhouse-restaurant, founded by the brothers Altin and Anton Prenga. The brothers, after having lived for years in Italy, decided to return to Albania. They opened their business, thus realizing the dream of a lifetime. It’s the perfect place to spend a few hours surrounded by nature. You can play in the fields or admire many of the animals raised on the farm.

Mrizi i Zanave’s motto is: ‘Think globally, eat locally!’. The menu includes only local products. Grown by local farmers or in the gardens of the same farm. From wines typical of the Albanian land, such as the prestigious Kallmet autochthonous vine – to goat cheeses, burek with spinach or pumpkins and so many other gastronomical delights. Those who want to pamper themselves even more can stay overnight. The family’s old home offers four splendid rooms furnished in wood and stone. Upon awakening, the view over the vineyards leaves you speechless.