Home » Blog » Albania – Everything you need to know

Albania – Everything you need to know 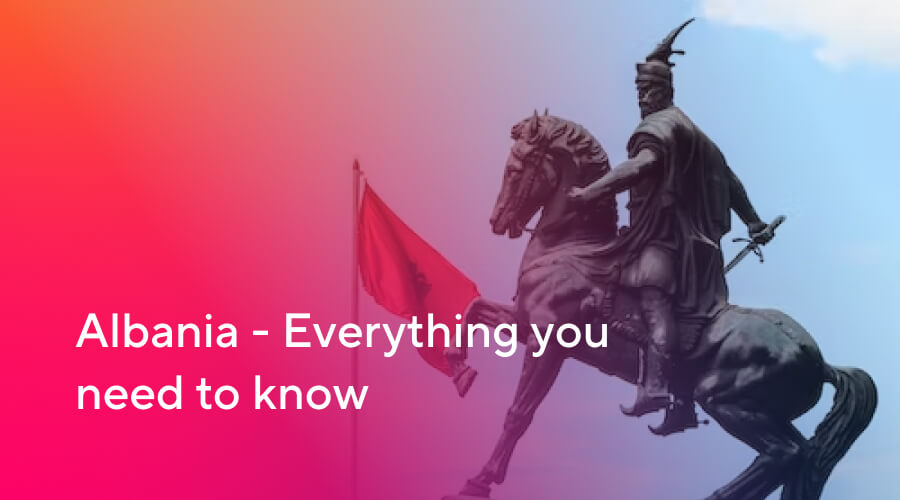 Albania is bounded by Montenegro to the northwest, Kosovo to the northeast, North Macedonia to the east, Greece to the southeast and south. Also the Adriatic and Ionian seas to the west and southwest, respectively.

Albania has mountainous geography. About three-fourths of its territory consists of mountains and hills with elevations of more than 650 feet above sea level. The remainder consists of coastal and alluvial lowlands. The North Albanian Alps, an extension of the Dinaric Alps, cover the northern part of the country. With elevations approaching 8,900 feet (2,700 meters), this is the most rugged part of the country.

Tourism is considered one of the largest industries in the economy of Albania. It has significantly increased since following the fall of communism in the country. The country has a rich historical and cultural heritage and natural beauty. Varying from clear turquoise waters fringed by sandy and rocky beaches to contrasting mountainous interiors. The coastline has a well-preserved natural ecosystem that can boast a unique combination of a diverse climate and landscape.

As Albania extends over the Adriatic flyway, birdwatching is recently gaining in popularity.  That’s why the coastline has a lot to offer for both visiting and resident bird watchers. The extensive wetlands, with many different Mediterranean and European species, contain many significant birding sites throughout the year. The lagoons in Karavasta, Patoku, Narta, and various other protected areas are just a few examples of popular birdwatching destinations.

Here are some of the best beaches in Albania, there are a lot more.

Looking west across the Adriatic Sea – direction of southern Italy – Drymades gets super-fiery sunsets. But that’s for later. From the moment the day dawns it’s a stunner, with almost Maldivian-blue waters caught in a small bay. As a result, there is a pebbly stretch as well as a sandy expanse. Both of them are divided by a large rock – and things never get crowded. Even during summer. So if you’re looking for an alternative to the manic Med, here’s your answer.

This might just be Albania’s best-loved beach town. A gash of tropical blue glimpsed as you crest the dramatic Llogara Pass and see it spread below. It’s certainly one of the most frequented beauty spots along the Albanian Riviera. But despite that, it hasn’t lost its charm. There are several corkingly lovely stretches near the town, among them Livadhi. A bay of fine white pebbles edged by olive trees; and Potami, attractively spread between the sea and a river.

Against a rustic backdrop of peaks, olive groves, and grazing goats, the largest beach in Albania is impressive indeed. An unspoiled magic carpet of pure-white pebbles unfurling for 7km (4.3mi) along the Albanian Riviera, rinsed by the preternaturally blue Ionian Sea. Moreover, the village of Borsh, about 2km (1.2mi) from the beach, is home to a population of Albanian Muslims. You might find little mosques hidden in the green hills beyond, along with the occasional castle.

The city of Vlora, the third-largest in Albania, commands a bay where the Ionian Sea merges with the Adriatic. A town of historic merit. From Vlora port, with Teuta Boat Tours, you can hit the unspoiled bays of Karaburun and Sazan. But if you’d rather go it alone, drive in a southerly direction. Flop on the shores of Radhime or Orikum. Both are textbook examples of the Albanian coast. Radiating brilliance in toothpaste-white-and-blue.