Albanian Movies you must watch! 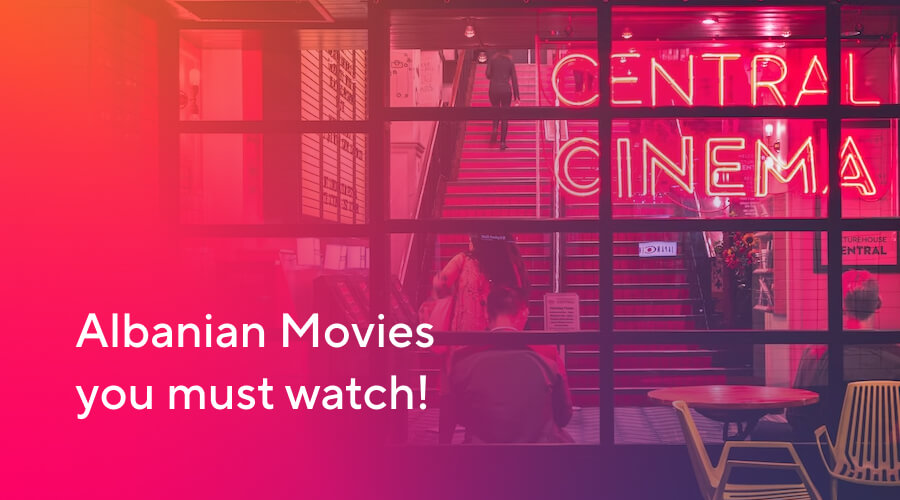 Albanian Movies you must watch! If England has Shakespeare to quote over and over in their daily conversations, we have our black and white Albanian movies. Okay, I know some movies are not of the same artistic skill as Shakespeare’s works, but for us they have the same value.

In our next column, we will talk about the expressions from Albanian movies that are quoted the most in our daily conversations. Although, to be honest, we will never run out of scenes and jokes to use.

One of those Albanian films that are not forgotten. I chose to start with this film, even though there are many others, because I associate it with my childhood. Double Check is a very popular comic film, directed by Bujar Kapexhiu, who this time plays the protagonist of the film. The film is full of unexpected comical situations.

However, we will not dwell on the content of the movie. We invite you to watch it if you have not yet seen it. What we will talk about are the most popular jokes used in our daily lives, taken from this movie. You can watch the movie on YouTube here.

To preserve its originality, I didn’t translate the quote into English, but it basically means when someone wants twice the benefit of a reward. This is such an immortal joke that it is still commonly used in everyday conversation today.

The actress tells the joke first, Manjola Begolli, who plays Rudina. But it is Fadil Kujovska (1951-2014), the actor who plays the famous Cuku, that gives the humorous effect that this quote holds.I remember when I was a little girl and I was buying ice cream. But I wanted to buy another package of cookies and I was having a tantrum over it. My mom felt bad about it, because I was basically crying out loud, I want this as well. I want this as well.

At that moment, the seller addressed me: Oh dashka edhe akullore edhe cokollate .The tension of the awkward situation for my mom was eased immediately and laughter erupted. Of course, at that moment I didn’t understand anything. Much later, when I saw the film, I understood where this striking expression came from. The memory is always accompanied by a smile.

We cannot count the number of times we have had guests over at our house. The humorous Cuk does not disappoint this time either. In many cases, even though the table was ready, without the arrival of the guest, we would never start eating.

Therefore, every time something like this happened to us, some naughty child would come out from the bottom of the stairs and shout, Shahisti nuk vjen. which in english means The chess player is not coming. Of course, the laughter would ease the tense situation, especially when everyone was hungry and staring at the overflowing table. After this joke, toasts were clinked with the guests and family present everyone would continue to eat.

During the 2000s, it was common to call people on a private number.

At that time, the use of mobile phones exploded and mobile companies became widespread for the first time. Just imagine how often this joke was used between people.

Being necessarily associated with that thick voice of the actor Fadil Kujovska, the famous Cuku of this legendary film.

Whenever we asked who you are, the answer was always: Kush jeni ju? Familja e shokut Kopi When you combine the duo of Fadil Kujovska and Aleko Prodani, you can’t help but have an unforgettable comedy scene. And it is not surprising that the jokes mentioned by these two have remained embedded in our memory as the most quoted among the most popular Albanian films.

Cuk, po ti do me vdesësh mua. Such an unforgettable phrase from Albanian movies

We couldn’t end this article otherwise without including this quote that we will never be able to honour enough.

This is the scene that follows the famous Cuk’s joke. While shoku Kopi runs home scared to death, thinking that his wife is cheating on him, the moment adds to the immortal comic effect.

The actor’s facial expression, Aleko Prodanit (1942-2006), otherwise known as shoku Kopi, is forever etched in our memory. Not only is it commonly used as a joke every time we’ve had enough of someone, but we can also associate it with that characteristic collapse in the chair, panting in exhaustion.

I remember endless situations when we used to gather as a family. We used this quote every time, especially when we couldn’t understand each other.

These passages from Albanian movies have been repeated countless times during childhood, adolescence, at the workplace, and many other events and places. We treasure these phrases and we cherish them. We believe that movie references and snippets will always be a part of our culture. This is precisely why our black and white movies are so brilliant and closely tied to our linguistic culture.

If you think that there are no Albanian romantic movies, you are wrong. Albanian cinematography is full of such gems, so we are bringing you 5 romantic Albanian movies that you probably haven’t seen.

Theorist Apostol Sako writes articles and gives lectures on the love of youth at a time when a great conflict occurs in his family. The daughter, Alma, is an engineering student.
She loves a singer, but her father wants to marry her to a diplomat. The conflict is resolved through comic situations, making this one of the most charming films in Albanian cinematography. Not only are the situations funny but also very cute, warming our hearts. Watch it now.

Tom Melgushi, orphaned and raised by his uncle and his uncle’s wife, works as a driver in the village. Toma is perceived as a rebellious and stern man by society. He has a close relationship with Katie, which requires them to make this relationship official, but Toma isn’t ready.

At the same time, Toma develops a special affection for Flutura, the biology teacher who has come from the city.

This is where the conflict starts and the complicated relationship between him and Flutura arises. The latter likes him, but the prejudices she has against him prevent her from believing in her feelings. Watch it now.

Zana and Bardhyli are two students who fall in love. Through the spiritual amplitudes of their love, the film reveals their dreams, desires, and preferences. The characters are more or less the same age but have differences between each other. The film gives the portrait of the young student and the life or doubts that accompany a young person. Watch it now.

A comedy about life in the 70s, where two young people who come from different religious faiths decide to marry each other and let their parents know about their love.

In the meeting between the two fathers, the boy’s father, a conservative, is surrounded by his wife and aunt, who create a story for him, including comical situations. Since he cannot hide that he does not like the girl who comes from another religion, he makes excuses to make this relationship impossible. All this is resolved through comical situations, and the couple finally ends up together. Watch it now.

Elteva, an employee at the state bank, begins to notice the damage being done to the economy by the work of a local stable, whose director is Martini. The latter is following the wrong economic solution. She is at a crossroads because the director of the bank is also a close friend of Martini’s. On top of that, her doctor thinks she is pregnant. Etlev’s boyfriend, who is also a team trainer, leaves her because he doesn’t feel ready to be a father. Between the conflict of her personal life and her career, Etleva tries to find the right balance and resolve this conflict.

These were some of the Albanian romantic movies that included comedy, laughter, and drama, but also romance and warm, youthful love. If you like them, we will bring you other similar movies that are worth watching at least once. Watch it now.

Albanian movies have recently debuted with success in several well-known film festivals in Europe, the United States, and worldwide. Finally, Albanian filmmakers are breaking into the international film industry.

Whether you’re looking for romance, comedy, drama, or anything in between, these are the best and most important Albanian movies to watch right now. Through these movies, you can learn more about Albanian culture and history. Cinema is a reflection of its own society. Movies are important to society because they reflect culture, change culture, and stimulate economic growth. Movies reflect a culture in so many ways.

Having their wedding in only two weeks, Anita and Bekim add the final touches to their big day. Despite expecting news from Anita’s parents, and with Bekim’s as head of the family, the couple seems to manage somehow with the preparations.

But when Bekim’s secret gay ex-lover, Nol, returns from abroad unexpectedly, the situation becomes complicated. Especially when Bekim realizes that Nol is still in love with him. Inevitably, the wedding banquet becomes loaded with tension when the unusual love triangle starts to unravel. More on IMDB.

An Albanian woman, Lume, lives with her husband, Ilir, and mother-in-law, Remzije. They live in their small Kosovar village. She’s haunted by night terrors, childless, and unable to get pregnant. If Lume cannot produce a child, Remzije’s responsibility will be to bring in a younger and more eager prospective wife for her son to consider.

Bowing under the pressure of being replaced, Lume concedes to abandoning modern medicine and seeks the help of witch doctors and mystic healers to treat her infertility.

Lume concedes to abandoning modern medicine. She seeks the help of witch doctors and mystic healers to treat her infertility. However, Lume’s appointments, first to a local witch doctor and then to a famed (and costly) televangelist healer, do seem to yield results, as Lume finds herself pregnant at last. But while the family celebrates, Lume’s long-repressed traumas from the war slowly rise to torment her again. More on IMDB.

Firstly, the story takes place in the early 1990s. While ten-year-old Nori and his father, Gezim, are trying to make a living in pre-war Kosovo.

Ten-year-old Nori (Val Maloku) and his father Gezim (Astrit Kabashi) roam the streets of Kosovo selling cigarettes and barely earning a living. Gezim knows nothing of Nori’s mother. Moreover, he’s an expert at escaping the past, and now he wants to flee Kosovo. Without Nori. As a result, only a few years after the fall of the Berlin Wall, Gezim is lured to travel west of Germany. Leaving his son behind in search of a new life. Feeling deserted and desperate to claim some sense of stability, Nori embarks on a dangerous journey to Germany, searching for his father. Will his tenacity, resilience, and sheer grit be enough to guide him? More on IMDB.

Is this a useful list? Do you have any suggestions for Albanian movies that we didn’t include? Please comment below!