Home » Blog » What are some interesting data about dua.com?

What are some interesting data about dua.com?

What are some interesting data about the dua.com application? There is nothing left unsaid about the social platform and dua.com App. The latter, even though it has been launched for almost 4 months, has over 250,000 users.

It is not just the users who surprise us in dua.com, but it is the data and interactions we have noticed between users. More precisely, their desire to use the dua.com app continuously, to match, like, chat, etc. Based on this, today we chose to bring you some interesting information about the dua app and some accompanying graphs.

There are more Android users than iOS

This is true, probably because most prefer to use Android rather than iOS as a phone. However, although there are more Android users, in fact the iOS ones are more active in interacting with the dua.com app.

Of course it couldn’t be otherwise, because we women are a little specific in our requirements. The graph below shows that, actually, women interact a lot in the app. Maybe even more than men, but we also do more dislikes than them. The demands that girls receive in dua.com are numerous, and necessarily the number of those who will refuse is high. It’s simple math after all.

Since we were talking about who does more likes or dislikes, here we have the answer for men. Apparently males always remain the hunter, so they will always be in search. We are not prolonging it much here. After all, men are also very active users, especially in the area of chat –  ​​interaction.

Men are twice as liberal when they like someone compared to women. A man on average makes 26 likes a day while a woman only 12. As for Super Likes, apparently both genders are the same. Who would have thought?

Here we are at our favorite part. In the chart below we have the countries which have made the most matches. Kosovo certainly ranks first as the most active country in terms of matches, followed by Germany and finally Albania. The chart below shows the more detailed list. 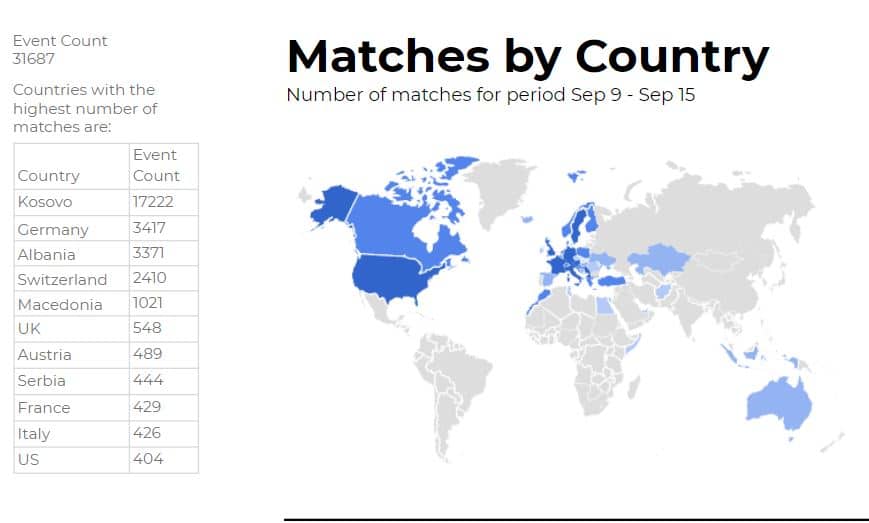 Of course we also have a lot of interesting statistics and data about the app. For example, Iphone users are more capricious than Android users. This is because they usually UnMatch more than the average Android users.

However, when we look at the individual level or the average number of messages sent by each user, those with Android devices seem to send the largest number of messages compared to iOS users. For today we will leave it at that, however if you like this data, we will bring you many more in the future. Enjoy our app!