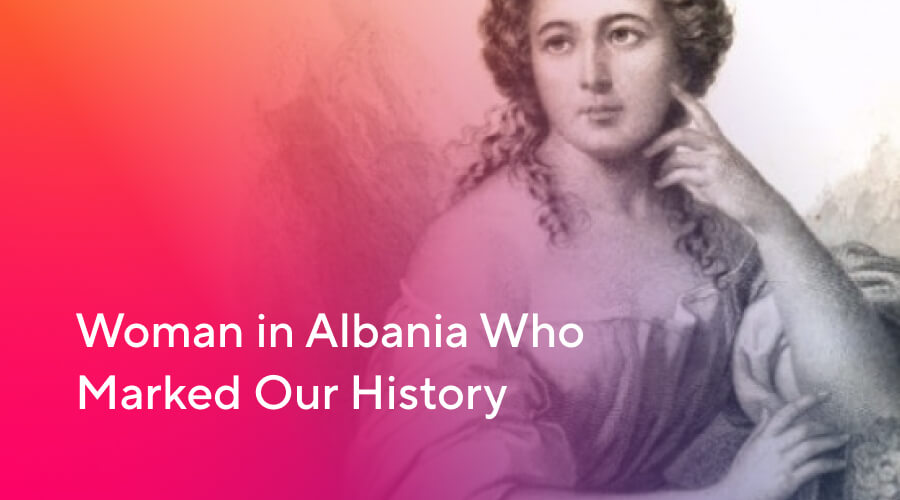 Woman in Albania are rarely remembered in the history of our country. However, this does not mean that we have not had historical women. Today, in the culture column, we would like to recall the traces it has left in our history.

From Cleopatra to Marie Curie, from Meryl Streep to Inva Mula, legends of art and culture, science and war strategy, politics, and aerodynamics, women, however disadvantaged, have shown that they had to fight five times more than men to leave their name behind in history.

Although a small country, we have produced from our cradle women who are strong, courageous, intelligent, and, above all, invincible no matter the circumstances. So today we bring back to our memory the 5 most legendary Albanian women in our history as a nation.

Elena was a progressive Romanian writer and publicist of Albanian origin. She bore the nickname Dora D’Istria, because then it was difficult to accept the role of women in literature, politics, law, diplomacy, and other professions that were the property of male minds.

Elena Gjika was called the Princess of European Culture at that time. It was not the first case of an emancipated woman on the continent. In Europe at that time, there were many cultured women, but very few managed to arouse the respect of the male world, and Dora was one of them.

Woman in Albania Lejla Rasih Dino: The noblewoman from Çamëria

Lejla Rasih Dino, a seasoned diplomat, spoke on behalf of Albanian women before the world authorities on the issue of the Albanian lands left outside the borders of 1913. She was the first Albanian woman to speak with courage at the right time, to the President of the Peace Conference in Paris, about the Albanian issue.

She approached the most vocal figure in world politics, Woodrow Wilson, and won the sympathy of him and his wife. He fought for the defence of the Albanian issue in general and of Kosovo and Chameria in particular.

Lejla Dino created the “Albanian Women’s Community” in Geneva, Switzerland, in 1919 and emphasised that the USA was Albania’s greatest friend. And indeed, this fact is still true even to this day.

Sisters Parashqevi and Sevasti Qiriazi should be honoured, especially because they opened the first Albanian school for girls in 1892.

In the battle of Vranina, Malësia above Shkodër, a young and beautiful girl, Janica Martinaj, stood out. She took the place of her murdered father and led Martinaj to victory against the Turks. The battle left a great impression on the foreign European media, but also left a mark on the history of our people.

The girl was reflected in foreign media as the “Albanian Joan of Arc.” Only 22 years old, she sparked the interest of many international media. At that time, The New York Times even wrote about it and published an article about the Albanian race, describing it as one of the most beautiful races in Europe.

Shote Galica: Heroine of the people

Shote Galica, a well known name, echoing even to this day. She was born in Drenica, Kosovo Province, in 1895. A prominent fighter of the Kosovar insurgent squads for the liberation and unification of all Albanian villages.

In July 1924, after the death of her husband, Azem Galica, she continued fighting at the head of her squad. She lost 22 family members in the massacres of Serbian chauvinists. In 1927, she settled in Albania, in Fushë Krujë, where she died that same year. To this day she holds he high title as “People’s Heroine”.

Through these women, we want to recall the Albanian woman’s journey to emancipation. We are grateful to each of the Woman in Albania in our history for their example and contribution!