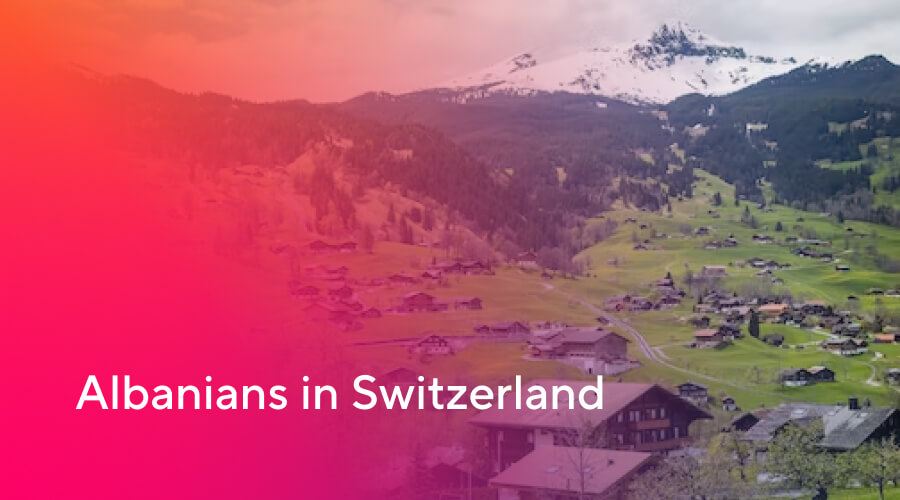 This article will explore the history of Albanians in Switzerland and their current situation, with a focus on their cultural traditions, political rights, economic contributions and social integration into Swiss society. It will also provide an overview of the challenges faced by the Albanian immigrants, so read on to learn more.

Some History of Albanian’s migration in Switzerland

For the majority of the 20th century, Albania and Switzerland had very limited connections. In the 1970s, because of raise of unemployment figures in countries such as Kosovo, Montenegro and North Macedonia Albanians, many migrated to Switzerland to start a better life.

This proved successful quickly because Albanians in Switzerland found employment with ease and soon became part of Swiss social structures. So much so that some opted not to return home anymore – instead inviting their family over too!

Prior to the 1980s, Switzerland was home primarily to male migrants who were not identified as Albanians due to their Yugoslavian citizenship. This longer stay enabled many Albanians, later on, to better profit through family reunification opportunities. As a token of appreciation for being accepted in Switzerland during the Kosovo war, the Kosovar Albanian emigrant community has installed a commemorative plaque in Zurich expressing its gratitude.

Throughout the 1990s, Switzerland served as a pivotal hub for Albanian immigrants from Kosovo. Numerous newspapers were published in the Swiss-Albanian language and acted as financial foundations for the KLA organization showing Switzerland’s pro-Albanian policy.

The fall of the Communist regime in Albania was only relevant to those Albanian expatriates living in Switzerland. Unlike its neighboring countries, like Germany and Italy, few citizens from Albania were illegally immigrating back home continually.

As a result of the deteriorating conditions in Kosovo during the 1990s, there was an influx of Albanians entering Switzerland. Unprepared for this sudden shift and overwhelmed by it, both parties – the host country and migrants alike – had difficulty adapting to their new circumstances.

According to a 2011 survey done in Zurich, Former Yugoslavs are considered one of the least desirable immigrant groups among Swiss people. In fact, they were rated even lower than Turks, Arabs and Germans. It is clear that this population has been judged unfairly by their host country’s citizens and swiss mentality.

Unfortunately, the Albanians have been harshly judged due to their overwhelming presence. As well as being one of the largest groups in Switzerland, anti-Islamic beliefs and issues surrounding immigrant crime have caused a negative representation of them.

According to a late 2010 report, most immigrant of the former Serbia and Montenegro (which mostly corresponds to Kosovar Albanians in Switzerland) had an astonishing crime rate of 31% compared with 23-24% for those from Croatia, as well as Macedonia when measured against Swiss population.

However, another group holds the crown when it comes to the crime rate in Switzerland. Despite this fact, Sri Lankans in Switzerland, are still seen more positively by society than Albanians. Which proves that Albanians were viewed and received unfairly.

Albanians celebrated the Declaration of Independence of the Republic of Kosovo on 17 February 2008 in Lausanne to demonstrate their pride and loyalty. Ultimately, this illustrates that there must be additional factors beyond a group’s criminal activities which affect its public image.

Regrettably, the Albanian diaspora living in Switzerland often experience xenophobia and racism. The integration struggles of some criminal Albanians have unfortunately resulted in a negative stereotype that plagues local Swiss people with fear, hatred, and insecurity towards all members of the community.

The Swiss People’s Party (SVP) and other conservative political parties in Switzerland that advocate for a reduction of immigration have become increasingly popular, causing many to hold negative attitudes towards immigrants. These organizations have even pushed several initiatives that some ethnic groups–such as the Albanians–perceive as discriminatory.

In 1998, the Zurich SVP released an election poster with “Kosovo Albanians” and a large “No” regarding financing for their integration project. Then in 2009, to the shock of many Muslims of Albanian descent, the Swiss People’s Initiative “Against Minaret Construction” was passed by citizens across Switzerland.

This result sparked widespread outrage from those affected as they expressed their vehement disapproval. In 2010, the “expulsion initiative” was passed after receiving a majority vote. This law stipulates that non-citizens who have committed serious crimes must be deported from the country in order to reduce crime rates and complicate naturalization processes for foreigners.

The “Sheep’s Poster” created by the SVP received global attention, with multiple immigrant groups in Switzerland describing it as discriminating.

Despite the growing economic integration of Albanians in Switzerland, unemployment remains a daunting challenge for many. In October 2018, major cities such as Kosovo and North Macedonia reported an alarming rate of 7.0% and 5.3%, respectively – both figures significantly exceeding that of permanent residents who are not part of the Albanian population.

The Federal Office for Migration’s research revealed that Albanian youth face various obstacles when entering the workforce, including a lack of vocational qualifications among their older peers and certain reservations.

During the 1990s, there were plenty of qualified Albanians who didn’t have their diplomas recognized. This resulted in them being unable to find jobs such as construction and catering—industries that typically wrestle with higher rates of unemployment compared to other sectors.

The social assistance rate for ethnic Albanians is higher in comparison to other countries, with massive disparities depending on the nation of origin. This has particularly impacted those from Albania. Fortunately, there’s been a surge in students of Albanian descent recently.

In 2008, there were only 67 Albanians enrolled in Swiss universities; however, that number has skyrocketed to 460 by 2017. Migration researchers and Albanologists have noticed a greater integration of the ethnic group into Switzerland — similar to the development of Italians over time.

According to the 2010 Amnesty International annual report, Switzerland’s “anti-minaret initiative” resulted in a greater number of racist attacks against Albanian Muslims and increased overall racism in the country.

The total population of Swiss citizens with Albanian ancestry, including dual and naturalized citizens, is estimated at 200,000. Moreover, 3.1% of the permanent Swiss residents declared that they use Albanian as their primary language— a figure totalling over 258 thousand individuals in 2016!

The Albanians are one of the largest foreign groups in Switzerland, alongside 316,525 Italians, 303, 525 Germans and 268,660 Portuguese. They can mainly be found within German-speaking areas such as Zurich, Basel Bern Winterthur and St Gallen – making these cities important hubs for the Albanian diaspora.

As official records in Switzerland categorize foreigners according to their nationality, it is difficult to track the exact number of Albanians residing in this country. Furthermore, individuals from the Balkans have higher-than-average rates of naturalization, meaning they will vanish entirely from these statistics once Swiss citizenship has been granted. As a result, an accurate figure for Albanian residents can be hard to come by.

Across Switzerland, the cities with the highest concentration of Albanian populations are Aargau, Geneva, and Zürich. Of course there are more but the majority are concentrated primarily in German-speaking areas. However, albanians are also present to a lesser extent in French and Italian regions where they’re imerged almost completely. Unsurprisingly, the lowest number of inhabitants can be found in places like Appenzell Innerrhoden, Nidwalden and Obwalden.

Since the 1990s, a multitude of organizations has been founded in Switzerland with the aim to represent Albanian diaspora populations. Initially, these were mainly religious and cultural associations located in larger cities. However, as time passed by more comprehensive groups arose that sought to speak on behalf of all Albanians living throughout Switzerland.

The Albanian Community in Switzerland (Albanian Bashkësia Shqiptare në Zvicër) is one of the strongest member associations. Particularly, for Muslims, there’s the Union of Albanian Imams in Switzerland (albe Unioni I imamëve shqiptarë né Zvicér) and Albania-Islamic Federation of Switzerland (ALB. Bashkēsia Islame Shqiptare Zurich). Both are powerful associations providing a robust platform to individuals that allow them to access quality services provided by their respective organizations.

For intellectual exchange between Albanians and Swiss, two major organizations are at the forefront: The Union of Albanian Intellectuals in Switzerland (Alb. Bashkimi i Intelektualëve Shqiptarë në Zvicër) and the Institut Suisse d’Etudes Albanaises (ISEAL). Additionally, the Society Switzerland-Albania provides a platform for dialogue and understanding between these two populations.

Moreover, various clubs have now become a part of the social landscape such as soccer teams, dance ensembles, local political organizations, and professional associations for students and professionals alike. Institutions dedicated to learning and religious societies are also present within our communities.

In May 2011, a uniting force was established in Bern for all Albanians living in Switzerland. This new umbrella organization is not just beneficial to the members of the Swiss-Albanian community but it will also serve as an effective voice advocating on behalf of all Albanian people from across the Balkan peninsula.