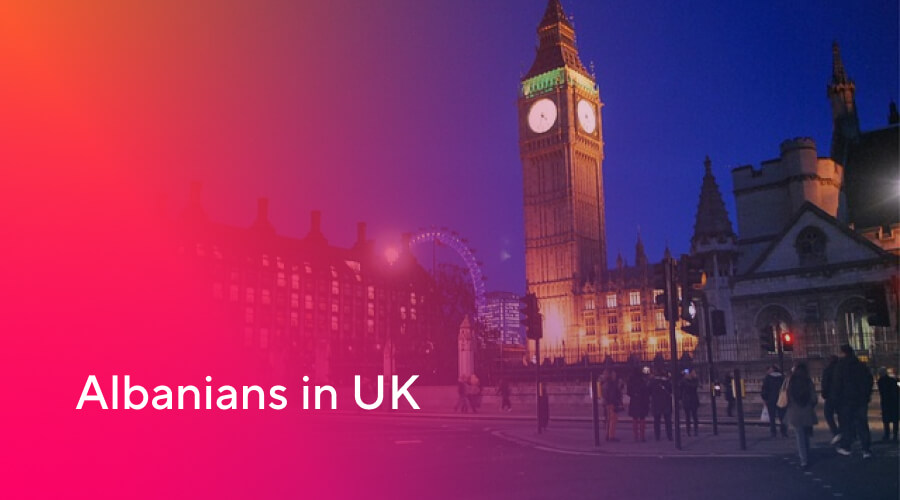 Albanians in UK – For centuries, Albanians have sought a better life beyond their homeland. Many chose to move to the United Kingdom for opportunities they may not find back home.

Some left for economic reasons, while others went there seeking refuge from discrimination and conflict. Whatever their reason, they certainly found success after arriving in the UK, from distinguished artists who continue to inspire millions to business moguls who are driving exceptional innovations in their respective fields and everyone else who contributes towards making this great country even greater.

In this blog post, we will explore how different generations of Albanian people have impacted society by providing unique cultural insights and innovation through various activities such as entertainment, education &amp; politics – all while continuing to uphold traditional values and beliefs!

How did Albanians come to be in the UK?

Albanians began arriving in the UK during the 1970s and 1980s, initially from what was then known as Yugoslavia. Albanian children were among those quickly making their home in the UK, both to escape the turmoil of their native Balkan country and to find work or better educational opportunities.

More Albanians arrived when civil unrest broke out in their homeland during the late 1990s. Encouraged by a government program aiming to bring professionals with valuable skills into the country, they continued to immigrate until 2004, when conditions improved in Albanian and Albanian immigrants were no longer welcomed into the UK with open arms.

Despite changes over time, they remain a key part of British culture today, having contributed immeasurably to the economy and society.

Britain has long been home to Albanian migrants, and the country’s open-arms approach to those wishing to settle in Britain has provided an important layer of much-needed social and economic support for these individuals.

Recent claims by prominent figures of Britain’s Albanian community that their initial decision to move away from their home country almost 20 years ago had paid off have pushed Britain even further into the hearts of these people.

Today, Britain provides a haven for many Albanians, not only because it is relatively immune from their conflicts back home in Albania but also due to its continued warm embrace and support of newcomers.

Contributions of Albanians in UK to the British society

The Albanian community in the UK has made immense contributions to British society since their arrival here. The UK government has acknowledged their hard work and dedication, especially regarding border control around the English channel.

They have been responsible for stopping many spurious claims from unfounded sources, as well as providing valuable intelligence to ensure that our delicate border remains secure.

Furthermore, Albanian immigrants have also found success in their careers and the economy, demonstrating a resiliency that is invaluable to an ever-changing world.

Although there may be hurdles along the way, rest assured that many Albanians are devoted to working diligently within Britain’s society.

Challenges Albanians in the UK face

Albanians in the UK face a multitude of challenges. In the first half of 2019 alone, Albania had one of the highest recorded numbers of migrants seeking asylum primarily from discrimination, ethnic conflicts, and violence.

This has brought unique problems to Albanian communities, including integration difficulties for those who make a positive decision to move to the UK. Many arrive lacking basic language skills, experience cultural and educational barriers, and are disadvantaged by housing policies that often favor native Brits first.

This can create difficult circumstances for individuals and families trying to adjust. Despite these obstacles, it’s inspiring to see many young migrants integrating into British life and having their voices heard in society.

Prospects for Albanians in the UK

Having new guidance from the UK government has certainly opened new prospects for Albanians in the UK as it stops discriminating against non-EEA citizens.

With new measures from the past years, British employers are encouraged to hire more highly skilled and qualified individuals regardless of their nationalities.

Therefore, they have an excellent chance of success in the UK if they follow new regulations and use their skills to approach new opportunities. There is hope that with such new guidance, the future for Albanian immigrants in the UK will be brighter.

Additionally, new startup initiatives are springing up in pockets of the country, providing more options and specialized services to would-be entrepreneurs from Albania.

Above all else, these recent developments provide hope for a future for Albanians in the UK. This community can now look forward to a brighter period of unprecedented professional and personal growth.

Albanians are proud of their heritage and culture

Albanian nationals take a great deal of pride in their heritage and culture and Albania in general. Zooming out, it’s easy to see why – despite being victims themselves of modern slavery over the centuries, about a quarter – 25% – of Albanian nationals made positive decisions that have shaped Albanian culture and identity immediately upon the country’s creation.

Such primary sources proving Albanian identity added to Albanians’ unique traditional cuisine, and naturally, this has caused Albanian peoples to be proud of their heritage. All around, you’ll find them wearing traditional clothing on special occasions, hosting parties celebrating specifically Albanian events, and incorporating Albanian folklore into the current popular vernacular.