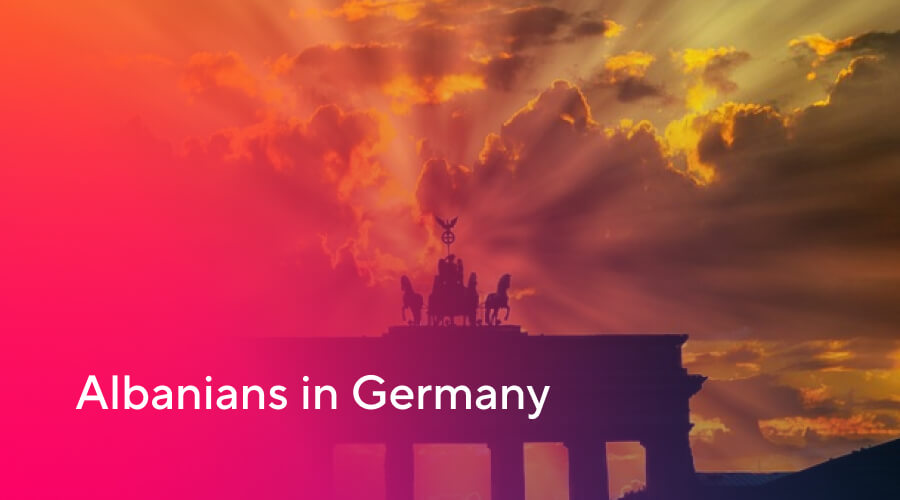 Albanians in Germany – For many years, Albanians have been leaving their home country to live and work in Germany.

With its thriving economy, cultural diversity, and vibrant communities, there’s no wonder why they choose this destination.

This blog post explores the experiences of Albanian people living in Germany – from their reasons for emigrating to the adjustments they had to make when settling in a new country. From how they contribute to German culture to how they take advantage of all the opportunities available, we’ll gain insight into what it’s like being an Albanian living in Germany today!

The Albanian community in Germany

Germany has a large ethnic Albanian population, with cultural centers and organizations located in multiple cities throughout the country. Many of these ethnic Albanians were foreign workers when they arrived, but some received German state citizenship over time. Others have obtained Ankara agreement status, meaning they can apply for Turkish citizenship if desired.

Many of these cultural centers continue to serve as hubs for cultural celebrations and education for the new generation of German-born Albanians. Programs are often established to pursue career goals and provide resources that might otherwise not be available to this special demographic.

Why they left Albania and come to Germany?

The arrival of Albanian immigrants in Germany was largely due to the turmoil experienced in their home country during the late 20th century. Soviet domination over Albania brought about a communist regime that left its people economically desperate, leading to an exodus of Albanians seeking a better life abroad starting in the early1990s.

Many Albanians arriving in Germany found work as migrant workers, providing a reliable source of income for them and German employers alike. From then up to today, Albanians continue to migrate to Germany with hopes for a more prosperous future for themselves and their families.

In 2021, 13,210 Albanian asylum seekers were registered in the EU, mainly in France, Belgium, and Germany. Thousands more applied in the US. Of these, hundreds are granted asylum yearly despite Albania being officially a safe country of origin.

The estimates have placed the number of Albanians in Germany as high as 471,000. They are predominantly concentrated in the states of Baden-Württemberg, Bayern, Hessen, Nordrhein-Westfalen, and Niedersachsen. Berlin, Hamburg, München, and Stuttgart represent the metropolitan areas with the most significant Albanian population in the country.

How they’ve adapted to German culture?

Albanians are one of the largest immigrant groups in western Germany. During the same period, a large wave of Albanian immigration to Germany was seen. This allowed Albanians to learn more about German culture and adapt accordingly.

This came with cultural integration, including learning the language, intermarriages, local food preferences, and the general culture of socializing with Germans. Over time, Albanian nationals have fully integrated into German society while maintaining their distinct cultural identity by protecting traditions that are still culturally important to them.

The challenges they face living in a new country

The most significant population of Albanians outside of Albania and Kosovo is located in Germany. Each year, thousands of Kosovar Albanians seek to migrate due to social and economic issues and have faced various difficulties while living as ethnic minorities in Germany.

Even though the country is home to many refugees from various parts of the world and most of them live well there, Kosovar Albanians seeking asylum in Germany often struggle for legal protection, access to education, cultural assimilation, and economic opportunity.

The language barrier can also present an obstacle as most people are used to communicating only in German. Additionally, persistent negative stereotypes remain a problem and make it difficult for many Albanians to build healthy relationships with their host society. Fortunately, numerous steps have been taken by both governmental and non-governmental organizations, as well as social media campaigns that have helped create awareness about the struggles of this population.

The benefits of living in Germany

Germany is composed of many diverse cultures from all over Europe, giving its inhabitants a unique perspective on the world. Germany’s geographic location also benefits its citizens, as it shares borders with nine nations, including Nordic and Balkan countries. As Germany is located in central Europe, it provides easy access to an array of neighboring tourist attractions and global industrial hubs.

Living in Germany also gives you access to world-class education and healthcare systems, enabling residents to receive top-notch training and medical care. Germany’s environment is very welcoming to foreign visitors and immigrants alike, which makes it easy for newcomers to fit in and make friends quickly.